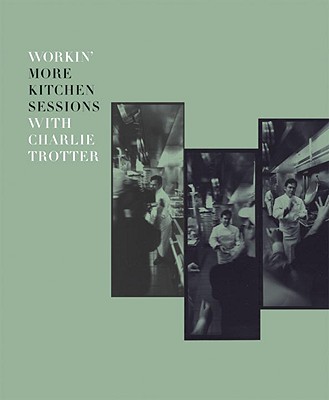 In this follow-up companion to The Kitchen Sessions, Charlie Trotter celebrates the art of cooking, pulling inspiration from the 1950s jazz canon, with over 80 unique, vegetable-based recipes that are both beautiful and accessible.

In 1956, Miles Davis's legendary quintet went into the studio for a series of marathon recording sessions. The resulting albums, including Workin' with the Miles Davis Quintet, are among the most influential in the jazz canon. Just over 30 years later, chef Charlie Trotter began staging his own nightly sessions, bringing the art of improvisation into the kitchen of his Chicago restaurant. Trotter continues to take inspiration from the jazz greats, using his mastery of tastes and textures to fashion brilliant, daring culinary compositions out of an ensemble of the finest ingredients.

Trotter's award-winning PBS cooking show, The Kitchen Sessions, first presented the chef's artistry to home cooks around the country, and now he's back with a new 26-part series. In the companion volume, Trotter presents more than 80 recipes, arranged by ingredient themes that are fundamental to his cooking. Trotter sounds off the bass notes of root vegetables and squash in such dishes as Salsify Wrapped with Serrano Ham and Phyllo with Pears and Roasted Endive, and Zucchini and Duck Confit Gratin with Hazelnut Vinaigrette. He celebrates the summer bounty of corn and tomatoes through Halibut with Red Wine-Corn Sauce and Grits, and Tomato Tarts with White Anchovies and Caper Vinaigrette. For the last course, Trotter puts the spotlight on cheese desserts such as Honey Mascarpone Cannoli with Pine Nuts and then presents a generous selection of chocolate- and fruit-based desserts.

WORKIN' captures one of the world's most innovative chefs at the top of his form. Never have the results been more beautiful to behold and accessible to the avid home cook.


•  The first Kitchen Sessions with Charlie Trotter won the James Beard Award in 2000 for Best National T.V. Cooking Show, and the companion volume (60,000 copies sold) was named James Beard book of the year in the Chefs & Restaurants category.

CHARLIE TROTTER is the author of 14 cookbooks and three management books and is an eight-time James Beard Award winner. He is the chef and owner of the legendary Charlie Trotter's, which recently celebrated its 20th anniversary, as well as Trotter's To Go in Chicago. He recently founded C in Los Cabos, Mexico, and Restaurant Charlie in the Palazzo Hotel at the Venetian Resort and Casino in Las Vegas.

Anyone who wants to understand American cuisine as it enters the 21st century must eat at Charlie Trotter'¬?s. . . . No restaurant in America comes closer to delivering a flawless total dining experience.-Wine Spectator, honoring Charlie Trotter'¬?s as America'¬?s Best Restaurant