The Piñata That the Farm Maiden Hung (Hardcover) 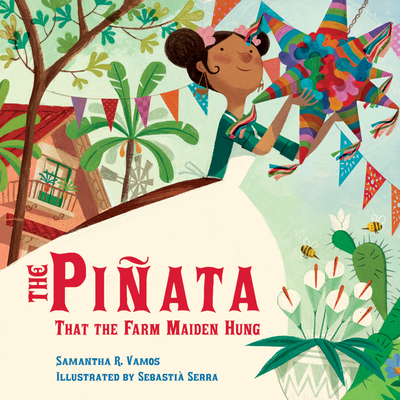 This is the bilingual story of the farm maiden and her cadre of animals, who crafted a festive piñata for a surprise birthday party. A beautiful and lively companion to the award-winning The Cazuela That the Farm Maiden Stirred.

A young girl sets out on errands for the day, and while she's gone, the farm maiden prepares a piñata from scratch with help from a boy, horse, goose, cat, sheep, and farmer. After they all fall asleep in the afternoon sun, they must scramble to finish preparations in time--just as the girl arrives back to her surprise party. Key English words change to Spanish as the cumulative verse builds to the celebratory ending. With the familiarity of "The House That Jack Built," the tale cleverly incorporates Spanish words, adding a new one in place of the English word from the previous page. This book makes learning the language easy and fun. Back matter includes a glossary, definitions, and directions for making a piñata at home.

Samantha R. Vamos is the author of Alphabet Boats, Alphabet Trains, Alphabet Trucks (illustrated by Ryan O’Rourke), The Cazuela That the Farm Maiden Stirred (illustrated by Rafael López) – 2012 Pura Belpré Illustration Honor – its companion book, The Piñata That The Farm Maiden Hung (illustrated by Sebastià Serra), and Before You Were Here, Mi Amor (2009, illustrated by Santiago Cohen). Samantha previously worked as an attorney, practicing in Washington, D.C. and Chicago, IL.  Samantha was born in the Midwest, grew up on the east coast, and lived in the Pacific Northwest before moving to the Bay Area with her husband, son, and their rescue puppy, Bowie. Visit Samantha online at www.samanthavamos.com.


Sebastià Serra has illustrated more than seventy children's books in many countries, including Inky's Great Escape: The Incredible (and Mostly True) Story of an Octopus Escape; A Pirate's Twelve Days of Christmas; and A Pirate's Night Before Christmas. His work has been displayed in museums, at universities, and in special exhibitions. www.sebastiaserra.com

♦ Follow along as the whole farm pitches in to create a piñata in time for the party in this delightful and engagingcumulative tale celebrating the spirit of Mexican folk art and traditions. Sing along in English or learn new Spanishwords and phrases; the narrative is rhythmic, accompanied by festive illustrations featuring bright cascarones, handcarvedalebrijes, papel picado fluttering in the breeze—and piñatas, of course, with detailed directions included to helpmake one at home.
—Foreword Reviews, STARRED review


♦ It takes the hard work and the imagination of many to throw a perfect surprise party. The farm maiden (campesina), a young boy, a farmer, and their group of animal friends prepare for a birthday celebration by gathering all the supplies to make a piñata for their special guest. Each character helps in its creation: The horse (caballo) hauls the water, the goose (ganso) mixes the paste, and the cat (gato) tears the paper that will become the colorful party centerpiece. The boy (niño) hangs the paper flags, while the farmer (campesino) carves traditional Mexican folk-art sculptures (alebrijes). After a long day of decorating the plaza, everyone falls asleep, forgetting to stuff the piñata with treats. But they awaken to fill it just in time as the birthday girl comes home to be surprised by all of her friends. This bilingual book written in cumulative verse poetry introduces new characters as the story unfolds, and the Spanish word for each animal replaces the English word from the previous page. The result is a colorful, festive surprise (sorpresa). Readers will enjoy singing "The Piñata Song" and will be inspired to make their own piñatas using the included recipe and instructions. A glossary of Spanish words and cultural terminology is also included. Reminiscent of a traditional folk rhyme, this book accompanies The Cazuela that the Farm Maiden Stirred, also by Lopez. VERDICT An essential addition to any picture book collection.
—School Library Journal, STARRED review

In a familiar poetic format, award-winning Vamos amusingly illustrates how piñatas are made, while deliberately introducing some Spanish vocabulary and Mexican culture. The story starts as a short rhythmic verse that gradually translates terms. For instance, one page reads, “This is the boy/who shaped the clay/to make the piñata . . .” while the subsequent verses change boy to niño and clay to barro. Once the hard work of making the piñata is done, the family and farm animals can get down to the main event: a surprise party! Serra’s lush, warm illustrations in a saturated palette depict the enthusiastic people and animals who help make the piñata, which also will help readers pick up on the definitions of the Spanish words. The lively text and colorful art are engaging on their own, and the additional lessons in language and culture make this particularly useful for a classroom or group storytime. Instructions for making a piñata, as well as a glossary and pronunciation guide, round out this cheery, welcoming offering. –Booklist


Like Vamos’s The Cazuela That the Farm Maiden Stirred, this companion borrows the cumulative style and cadence of “The House That Jack Built” to introduce a Mexican tradition and Spanish vocabulary. Readers are swept into the anticipatory fervor as humans and animals eagerly pitch in to make a piñata. The latter have the most amusing roles: a goose contentedly mixes flour and water to make a paste, which holds together paper that is feverishly shredded by a cat perched on a rooftop and then bound by rope that a sheep placidly braids. The plot’s accelerating momentum comes to a jarring halt when the characters nap before the piñata is decorated and filled, but the pace picks up again when they awaken to finish the job. The lilting narrative and vivid, mixed-media art by Serra (Inky’s Great Escape) together facilitate the translation as words introduced in English appear in Spanish on the following page, with buoyant, folksy pictures providing the context. Though readers may be puzzled by the community shouting “Sorpresa!” at the very person who helped to organize the party, the energetic verse and whimsical art create an entertaining offering. –Publishers Weekly