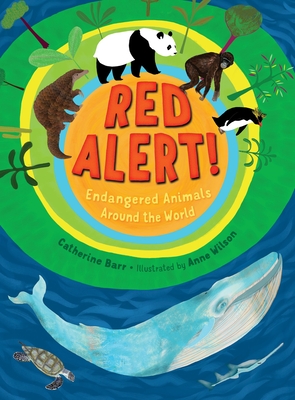 Inspired and endorsed by the "Red List" database of animals in peril maintained by the International Union for the Conservation of Nature (IUCN) this brightly illustrated book introduces species from six different habitats on six continents. Blending approachable text, secondary facts and lush art, Red Alert! offers full portraits of animals such as the Chinese giant salamander, the snow leopard, the blue whale, and the giant panda, and provides young activists additional resources for how they can help save these beautiful creatures.

Catherine Barr is an ecologist who has been a journalist, and editor, and worked for Greenpeace. She writes nonfiction that sparks questions and conversations. Her book The Story of Life: A First Book on Evolution was shortlisted for the English Association Picture Book Award and long listed for the School Library Association Information Book Awards. She lives with her family in Wales.

Barr and Wilson introduce 15 creatures that are included on the International Union for the Conservation of Nature’s “Red List,” which designates danger categories from “extinct” to “least concern: for animals, plants, and fungi. Animals described here are listed in the “vulnerable” to “critically endangered” categories. Using a “choose your own adventure” approach, an opening double-page spread directs readers to “pick a place” (biome), and then the next spread asks them to “choose a creature,” each bearing a page number, from that environment. On the indicated page, readers find an attractive full-page bleed painting of the animal (generally out of scale) in its natural setting along with a small human. Each spread includes similar information in a clear layout: the creature’s common name, zoological classification, and Latin name; a short narrative text usually connecting the animal and the human depicted; bulleted facts; and a box entitled “DANGER!” that gives the IUCN category and reasons for the designation. Each section also refers readers to a later spread that lists one website per animal for further information along with suggestions for general conservation efforts—and that instructs readers to return to the beginning and explore another animal. Interested kids will read the whole engaging book. Deeply colored mixed-media illustrations occasionally obscure the text. A world map on the front endpapers showing the habitats of the animals is partially hidden by the jacket flap. The last page lists 60 other animals on the Red List, for further exploration. Fascinating for both researching and browsing.
—Kirkus Reviews


Action for Animals — Introduce students to 15 fascinating —and endangered— species around the world. From the blue whale to the Sunda pangolin, these animals are all on the IUCN Red List of animals in peril.
—Learning Magazine