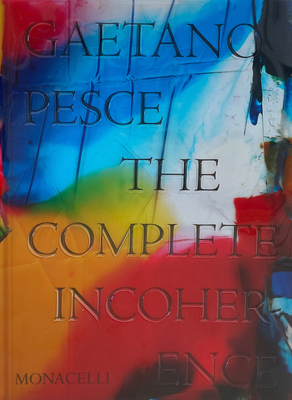 The definitive volume on Gaetano Pesce's incomparable life and career, as told in the iconoclastic artist-designer's own words.

In a category all his own, Gaetano Pesce is widely considered one of the most important, and elusive, creative figures of the last half century. Bridging numerous key art and design movements, while never truly belonging to any of them, Pesce's singular practice has remained steadfastly provocative, defying widely held notions of convention, utility, and good taste.

Yet as New York magazine demonstrated in its feature on the 'Pope of Gloop' upon the opening of his recent solo show at acclaimed gallery Salon 94, the world has arguably caught up to Gaetano Pesce. Now in his eighth decade, Pesce recounts his life and career to renowned design curator and critic Glenn Adamson, generating discussion conducted over several years that is as informative as it is surprising. Discussing his incomparable decades-long career which includes the creation of the classic articles of his UP series, the effusively postmodern design for Chiat/Day's headquarters, and countless works of furniture and design objects in his signature poured resin - Pesce shares his wide-ranging thoughts on art, design, and architecture.

Always forward-looking, Pesce's process of reinterpreting and transforming the premises of modern design to create idiosyncratic and deeply personal works beat a path for multidisciplinary design practice seen everywhere today. Particularly in his exploration of introducing imperfections, if not 'defects' into the traditionally uniform systems of mass fabrication, Pesce turns out to be much more of a prophet of modern design than a curious detractor.

Gaetano Pesce: The Complete Incoherence is the long overdue summary of an irreverent, wildly inventive career that should inspire practitioners across all creative disciplines.

Glenn Adamson is a curator and writer who works at the intersection of craft, design history, and contemporary art. He has previously been director of the Museum of Arts and Design, New York; head of research at the V&A; and curator at the Chipstone Foundation in Milwaukee. Adamson was the co-curator of Crafting America at Crystal Bridges Museum of American Art (2021); Objects: USA 2020 at R & Company Gallery (2021); Voulkos: The Breakthrough Years at MAD (2016); Beazley Designs of the Year 2017, at the Design Museum, London; and Things of Beauty Growing: British Studio Pottery, at the Yale Center for British Art (2017). Adamson’s publications include Fewer Better Things (2019); Art in the Making (2016, co-authored with Julia Bryan-Wilson); The Invention of Craft (2013); Postmodernism: Style and Subversion (2011); The Craft Reader (2010); and Thinking Through Craft (2007). He contributes regularly to Art in America, Crafts, Disegno, frieze, The Magazine Antiques, and other publications. His book Craft: An American History was published by Bloomsbury in January 2021.