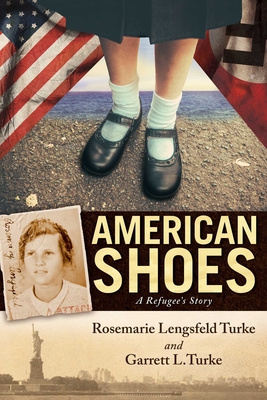 Commended as a "moving and hopeful story of courage and perseverance" in a starred review by Booklist, American Shoes is a profound mosaic of memories recounting 15-year-old Rosemarie Lengsfeld Turke’s escape from Nazi Germany, leaving her life and family behind to forge ahead in an America she left as a small child.

Set against a backdrop of Adolf Hitler’s rise to power, the reign of Nazi Germany, and the entire course of World War II in Europe, American Shoes recounts the tumultuous childhood of a young American girl and her family trapped within a country that turned against itself, where human decency eroded and then vaporized. Forced to grow up in the midst of endemic fear stoked by a ravenous madman, American Shoes portrays the breakdown of a society from a child’s point of view, deep inside a land where millions of law-abiding citizens were targeted as threats, and then removed for extermination.

This is the story of a brave girl who, despite not being Jewish, was perceived to be one of those threats and was compelled to keep her American identity secret for fear of her family’s arrest, concentration camp placement, or worse. Fighting to see through a relentless barrage of Nazi lies and propaganda, caught within a nation where resistance or opposition meant incarceration if not certain death, American Shoes illuminates one family’s struggle to survive against impossible odds as a cataclysmic world war marched closer and closer until it was upon them.

Vividly told for the first time after seven decades of a family’s collective silence, American Shoes reveals the story of a brave and spirited young girl named Rosel who refused to accept the new order of a world gone mad, inside a society that became more sinister and macabre than any childhood nightmare could ever be. Driven by the faint memories of the land where she was born—a hazy beacon that guided her toward freedom and a new life—this is the story of Rosemarie Lengsfeld Turke.

Rosemarie Lengsfeld Turke is an American citizen who spent a large part of her formative years growing up in the clutches of Nazi Germany. Her family spent many years trying to escape the war’s atrocities before Rosemarie was able to board a ship back to America alone at the age of 15, leaving her family behind until they could be reunited years later. Rosemarie has spent her life nurturing kindness and compassion in children as an au pair, as a Montessori directress, and as a parent, grandmother, and now great-grandmother. While working on American Shoes, Rosemarie has found that sharing her story and inspiring others is her true life’s purpose. She strongly believes that children are the keepers of the light.

Garrett Turke is a former clinical psychologist who has been a father, caregiver, and healing professional for more than three decades, and is the author of two previous books: There’s a Window to Heaven (2018) and 497 Nails (2015). He has traveled the world extensively, beginning in childhood, including multiple trips to West Africa, the Mediterranean, and eastern Asia. Garrett attributes his passion for championing the underdog to his father, and his longing to see the world as a colorful, compassionate place to his mother. Despite the many diverse aspirations and occupations he has pursued, Garrett has now found his lifelong dream as an author.

*STARRED REVIEW "A moving and hopeful story of courage and perseverance in the face of hardship in WWII Germany, told through the eyes of a child. Back matter includes a trigger warning, sketches, an epilogue, a postcript, discussion questions, acknowledgements, a glossary, terms and historical events, maps, and a creative liberties disclaimer."
— Booklist, February 1, 2022

“A vividly told, viscerally affecting story of heart wrenching loss, terror, and, ultimately, triumphant victory of good over evil.”
— Twesigye Jackson Kaguri, author of A School for My Village and Victory for My Village

“The harrowing tale of one family’s struggle for survival in WWII Germany cinematically told through the eyes of a young girl forced to grow up far too young, American Shoes offers a powerful message about trauma and redemption. In these trying times, Rosel’s story reminds us that we must confront the darkness of our history, or we risk repeating it.”
— George Kitson, television writer, Marvel’s Agents of S.H.I.E.L.D.

“Heartbreaking yet hopeful, American Shoes is a riveting true story that captured my heart while taking the journey with Rosemarie. All ages will enjoy learning about the power of the human spirit through her story.”
— Antriece Hart, motivational speaker and author of Anointed Visions

“American Shoes is one of the most poignant books on the market. It’s a page-turner that should be read by every age.”
— Brit Elders, writer, editor, and CEO at ShirleyMacLaine.com

“American Shoes is an enlightening and personal perspective on what you learn in your history books. Captivating from the start. Raw and emotional.”
— Danielle Clark, Wine and Words Book Club

“Stories of terror and profound sadness about World War II are not new, but to follow Rosel as she navigates the horror, endures the challenges, and boards the Marine Flasher very much alone…it is a journey we all need to take. American Shoes has a power I will not forget.”
— Mary Ellen Wood, Schuler Books, Okemos, Michigan

“American Shoes will encourage and ever so gently challenge you to enlarge your vision and create a healthier future for you and for those around you. Powerful, intense, hopeful!”
— Gerard Mauzé, educator and juvenile justice trainer

“This is not a passe, young adult story of historical and autobiographical significance. American Shoes is an exemplar of the psychological, sociological, historical, and political influences of pain, suffering, perseverance, and ultimately, love.”

“My parents asked me to read this book about Nazi Germany, and I am glad they did! I found my questions about what is happening in today’s world answered inside the pages of American Shoes. My mind kept switching between 1930s Germany and what is happening today. A must read and a warning for us all.”
— Yusuf Abbas, 19-years-old

“The book American Shoes was wonderful and well-written. Its scenery pulled me in, and I just could NOT put it down. I think this story would make reading historical books in the classroom fun again!”
— Caleb Hart, 15-years-old

“A powerful book for understanding life and justice…with important lessons for our times. American Shoes is a powerful, emotional, sensual, intimately woven story teaching us how wounds morph into wisdom.”
— Carla Guggenheim

"American Shoes will quickly draw you into the life of a teenage girl and her family during World War II. A memoir of courage and determination.”
— Stefanie Kyte

“American Shoes is a beautifully written, powerful story. I was drawn into the account from the first page…and inspired throughout.”
— Ruth Seagull

“Rosemarie Turke, with Garrett’s help, has given us a tremendous gift. I hope that we can accept and fully appreciate it. We must guard against the kind of horrors she experienced and relates. To paraphrase Rosel: Maybe America is still out there, alive and well, ready to help us.”
— David Hopkinson

“Rosemarie’s stories are treasures, and I am so glad she has shared them with the world in American Shoes.”
— Carla Starrett-Bigg

“A sobering look at the far-reaching effects of war, American Shoes is an enlightening and painful reminder that wars forever damage those who are forced to live through them.”
— S. Russick

“American Shoes shows how destructive political division can be, but also how people can pull together to provide help and support between one another regardless of nationality or origin. This is how the world should operate, and the blueprint for that is found within these pages.”
— Mody Diagne Diop

“American Shoes is the reflection of all immigrants from all over the world. As an immigrant from West Africa, I found myself inside the mind of young Rosemarie chapter after chapter. Captivating, exciting, educational, and ultimately uplifting—a life changing read!”
— Amadou Nikhor Mbenge

“A lesson on life from a most horrific and terrible time, this is the story of a small child, now a grown woman, who opened her scars and wounds to the world. May we move forward from her journey inspired to make this world peaceful! American Shoes is a must read for all ages.”
— Norma M. C. Myers