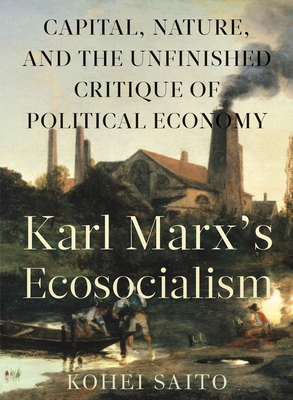 Karl Marx, author of what is perhaps the world's most resounding and significant critique of bourgeois political economy, has frequently been described as a "Promethean." According to critics, Marx held an inherent belief in the necessity of humans to dominate the natural world, in order to end material want and create a new world of fulfillment and abundance--a world where nature is mastered, not by anarchic capitalism, but by a planned socialist economy. Understandably, this perspective has come under sharp attack, not only from mainstream environmentalists but also from ecosocialists, many of whom reject Marx outright.

Kohei Saito's Karl Marx's Ecosocialism lays waste to accusations of Marx's ecological shortcomings. Delving into Karl Marx's central works, as well as his natural scientific notebooks--published only recently and still being translated--Saito also builds on the works of scholars such as John Bellamy Foster and Paul Burkett, to argue that Karl Marx actually saw the environmental crisis embedded in capitalism. "It is not possible to comprehend the full scope of Marx's] critique of political economy," Saito writes, "if one ignores its ecological dimension."

Saito's book is crucial today, as we face unprecedented ecological catastrophes--crises that cannot be adequately addressed without a sound theoretical framework. Karl Marx's Ecosocialism shows us that Marx has given us more than we once thought, that we can now come closer to finishing Marx's critique, and to building a sustainable ecosocialist world.