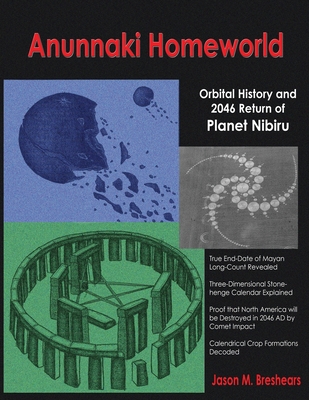 The Anunnaki is a legendary race that appears in the oldest documents preserved by mankind. They are said to inhabit an outermost planet that orbits our sun in an extremely elliptical orbit. Each time this planet gets near to the earth it creates planetary cataclysms. Many researchers claim it will be returning soon. The work of Zecharia Sitchin, author of the Earth Chronicles series of books, focuses on the Anunnaki and their previous visits. Many have asked Sitchin, "When will this planet return?" He never gave an exact date, but said it was more than halfway back. Jason Breshears gives an exact year, and does so confidently, due to his extensive research. He delves not only into historical records, as Sitchin had done, but also uses scientific cycles and mathematical formulas that relate to our concepts of planetary time and orbits. The historical records, chronologically presented by Breshears, help in identifying cyclical patterns. He also employs advanced geometry, interprets complex crop circle patterns, and uses biblical prophecy in support of some of the astronomical events he has predicted. He does not cover much on the mythical aspects of the Anunnaki gods themselves, but focuses more on the actual sciences that can predict their return. Ancient stories and carefully documented proof are two different things. For these reasons, this book is highly recommended.