Notes From the Christian Circus (Paperback) 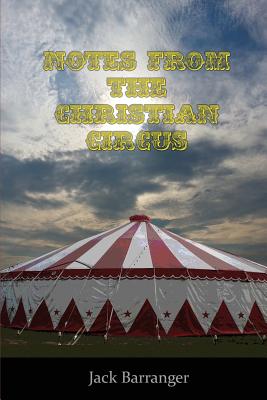 A search for truth by a serious seminary graduate and Christian seeker at the time, Jack Barranger. Join him in the discovery of pitfalls, strengths, weaknesses and humor found in various followers and groups that try to keep him on the path. Jack's decisions made from these encounters repeatedly bring him back from the brink of a blind swan dive into the oblivion of fundamentalism. Despite his disappointments he maintains a sense of humor through it all, chronicling an interesting, outrageous adventure. After looking at fundamentalist zeal (The Horace Valley Prayer Contest), what Jesus would experience if he suddenly showed up in the San Fernando Valley (Jesus Encounters the Growth Freaks), materialism (Christianity on Five Dollars a Day), avarice (A Somewhat Modest Proposal), inter-religious competition (The Big Game), an imaginative news report of the fulfillment of The Great Commission (Television Relic 666), Barranger concludes with a look at what Christianity could be if it gave up some of its sacred cows, hitched up its collective pants, spit on its hands and got to work (From the Circus to the Arena). Notes From the Christian Circus is an intellectual and spiritual smorgasbord. It is neither anti-Christian nor anti-religion. It is anti-stupidity and anti-hypocrisy. His intention is not to attack Christianity but to show a side of it that many do not follow - but some wish you would. The author cares about our relationship with God and our relationship with one's truth much more than he cares about our relationship to authoritarian groups, social organizations or entrenched dogmas.