Don't Call it a Cult: The Shocking Story of Keith Raniere and the Women of NXIVM (Paperback) 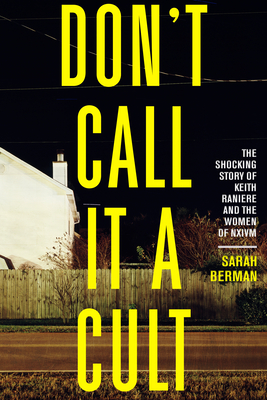 They draw you in with the promise of empowerment, self-discovery, women helping women. The more secretive those connections are, the more exclusive you feel. Little did you know, you just joined a cult.

Sex trafficking. Self-help coaching. Forced labor. Mentorship. Multi-level marketing. Gaslighting. Investigative journalist Sarah Berman explores the shocking practices of NXIVM, a cult run by Keith Raniere and many enablers. Through the accounts of central NXIVM figures, Berman uncovers how dozens of women seeking creative coaching and networking opportunities instead were blackmailed, literally branded, near-starved, and enslaved. Don't Call It a Cult is a riveting account of NXIVM's rise to power, its ability to evade prosecution for decades, and the investigation that finally revealed its dark secrets to the world.

Sarah Berman is an investigative journalist based in Vancouver covering crime, drugs, cults, politics, and culture. She is a former senior editor at VICE and past contributor to Adbusters, Maclean's, The Globe and Mail, the Vancouver Sun and other publications.

"...Sarah Berman’s Don’t Call It a Cult is a thoroughly reported work that details a staggering amount of relevant information the TV series left out."
--The Atlantic

"Investigative journalist Berman debuts with the definitive look at the NXIVM cult, which victimized dozens of women for more than a decade ... This deep dive behind the headlines isn’t to be missed."
--Publishers Weekly (starred review)

"Berman demonstrates the tactics cults use to manipulate and control without casting judgment or blame on the victims. Truly gripping, this is the definitive book on NXIVM."
--Booklist

"This is a very thought provoking book about a subject that many may have glanced at the headlines and not known much about. From empowerment to manipulation, it should serve as a warning to be careful about how you trust and with how much."
--The Parkersburg News & Sentinel

"An absolute work of art"
--Vancouver is Awesome

"Both captivating and frightening, Don’t Call it a Cult will astonish most readers."
--New York Journal of Books