Power Hungry: The Myths of ""Green"" Energy and the Real Fuels of the Future (Paperback) 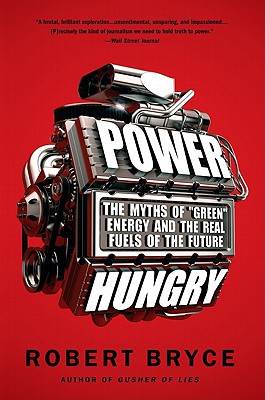 The promise of "green jobs" and a "clean energy future" has roused the masses. But as Robert Bryce makes clear in this provocative book, that vision needs a major re-vision. We cannot -- and will not -- quit using carbon-based fuels at any time in the near future for a simple reason: they provide the horsepower that we crave. The hard reality is that oil, coal, and natural gas are here to stay.

Fueling our society requires more than sentiment and rhetoric; we need to make good decisions and smart investments based on facts. In Power Hungry, Bryce provides a supertanker-load of footnoted facts while shepherding readers through basic physics and math. And with the help of a panoply of vivid graphics and tables, he crushes a phalanx of energy myths, showing why renewables are not green, carbon capture and sequestration won't work, and even -- surprise! -- that the U.S. is leading the world in energy efficiency. He also charts the amazing growth of the fuels of the future: natural gas and nuclear.

Power Hungry delivers a clear-eyed view of what America has "in the tank," and what's needed to transform the gargantuan global energy sector.

Robert Bryce is the acclaimed author of five previous books, including Smaller, Faster, Lighter, Denser, Cheaper: How Innovation Keeps Proving the Catastrophists Wrong, and Power Hungry: The Myths of "Green" Energy and the Real Fuels of the Future. His articles have appeared in numerous publications, including the Wall Street Journal, New York Times, Austin Chronicle, Guardian, and National Review.

He has given over 300 invited or keynote lectures to groups ranging from the Marine Corps War College to the Sydney Institute and has appeared on dozens of media outlets ranging from Fox News to Al Jazeera. Bryce is also the producer of a new feature-length documentary, Juice: How Electricity Explains the World. He lives in Austin, Texas, with his wife, Lorin.