Why We Serve: Native Americans in the United States Armed Forces (Hardcover) 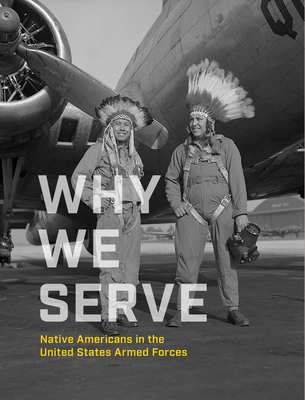 Why We Serve: Native Americans in the United States Armed Forces (Hardcover)

Why We Serve commemorates the 2020 opening of the National Native American Veterans Memorial at the Smithsonian National Museum of the American Indian, the first landmark in Washington, DC, to recognize the bravery and sacrifice of Native veterans. American Indians' history of military service dates to colonial times, and today, they serve at one of the highest rates of any ethnic group. Why We Serve explores the range of reasons why, from love of their home to an expression of their warrior traditions.

The book brings fascinating history to life with historical photographs, sketches, paintings, and maps. Incredible contributions from important voices in the field offer a complex examination of the history of Native American service. Why We Serve celebrates the unsung legacy of Native military service and what it means to their community and country.
ALEXANDRA HARRIS and MARK HIRSCH are senior editor and historian, respectively, at the National Museum of the American Indian. Other contributors include Senator Ben Nighthorse Campbell (Northern Cheyenne), Representative Deb Haaland (Pueblo of Laguna), Representative Markwayne Mullin (Cherokee Nation), Kevin Gover (Pawnee), Jefferson Keel (Chickasaw), and Herman Viola.
KIRKUS REVIEWS
Starred Review. "In a beautifully produced and illustrated volume commemorating the National Native American Veterans Memorial, Harris, senior editor and writer at Smithsonian’s National Museum of the American Indian, and Hirsch, a historian at the museum, offer probing, informative essays examining Native Americans’ participation in the armed forces. Drawing on interviews and historical documents, the authors show how motivations to serve were complex and varied [...] Although the authors write that the book is “a chronicle of ordinary men and women doing extraordinary things under often unforgiving circumstances,” many profiled seem far from ordinary."

BOOKLIST
This lavishly illustrated volume from the Smithsonian National Museum of the American Indian celebrates the dedication of the National Native American Veterans Memorial. Harris and Hirsch address the federal government's war against Native American tribes, which, later, did not prevent Native Americans from serving in the military. Though this is not a comprehensive history of Native American military service, it does cover a great deal of the stories, characters, and motivations behind it. As the main authors and other contributors, including Native Americans, delve into the complex relations between tribal nations and the U.S. in both chapters and many illuminating sidebars, they arrive at the inescapable conclusion that when called to service, Native Americans answered in numbers disproportionate to the population, and served with great bravery and honor. This many-faceted chronicle also contrasts the stereotype of a warrior culture held by white Americans with the facts about martial traditions, ceremonies, and the undeniable effectiveness of indigenous service members. This is a unique, handsomely produced, deeply enlightening, and invaluable volume ideal for public library collections.

ARMY MAGAZINE
"This incredible heritage of more than two centuries of service comes to life in the pages of Why We Serve with its first-person accounts of the wartime experiences of the Native Americans who served. The rich narrative is augmented by a superb and expansive collection of photographs, maps, paintings and illustrations reflective of the people and their service."

THE JOURNAL OF AMERICAN MILITARY PAST
"The book does an excellent job of highlighting Native American service in the armed forces, and it is attractively laid out, with scores of illustrations."

NATIVE AMERICAN AND INDIGENOUS STUDIES
"Why We Serve is unique; it brings together in one place an authoritative, well-researched text that tells the collective story of Natives in military service to the United States. It presents an impressive collection of artwork and photographs and is footnoted extensively for further reference and reading. The book cover is eye-catching for this topic. Why We Serve is well worth the read."