The Dig: A Novel Based on True Events (Paperback) 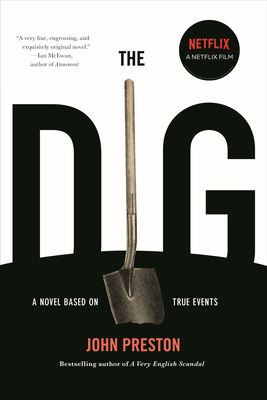 In the long, hot summer of 1939, Britain is preparing for war, but on a riverside farm in Suffolk there is excitement of another kind. Mrs. Pretty, the widowed owner of the farm, has had her hunch confirmed that the mounds on her land hold buried treasure. As the dig proceeds, it becomes clear that this is no ordinary find.

This fictional recreation of the famed Sutton Hoo dig follows three months of intense activity when locals fought outsiders, professionals thwarted amateurs, and love and rivalry flourished in equal measure. As the war looms ever closer, engraved gold peeks through the soil, and each character searches for answers in the buried treasure. Their threads of love, loss, and aspiration weave a common awareness of the past as something that can never truly be left behind.

John Preston is a former arts editor of the Sunday Telegraph and Evening Standard. He is the author of A Very English Scandal, the basis of the Emmy Award–winning miniseries, and the novel The Dig, the basis for the Netflix original film. He lives in London.

“All the elements are here for a corking adventure yarn, perhaps in the style of Howard Carter’s account of the discovery of King Tut’s tomb, which we see Mrs. Pretty reading. Yet despite the fact that most of the characters are real people…the novel’s interests are psychological rather than factual. Even as marvels are uncovered, an insistent strain of melancholy blows through these pages…The ambient dread is partly due to the gathering storm of World War II…But the apprehension is also metaphysical, connected to the fact that the archaeologists are not digging for buried treasure so much as disturbing a grave. Mr. Preston delicately portrays the effect the specters of mortality and decay have on each narrator. As it brushes away the soil from the remarkable ship, The Dig stages understated excavations of marriage (both Basil’s and Peggy’s) and parenthood (Mrs. Pretty, who became a mother at 47, fears she won’t live to see her son grown up). Thus Mr. Preston creates an intriguing and ultimately moving concoction, a true-life chronicle that delves into secrets of the heart.” —Wall Street Journal

“Shimmers with longing and regret…Preston writes with economical grace…He has written a kind of universal chamber piece, small in detail, beautifully made and liable to linger on in the heart and the mind. It is something utterly unfamiliar, and quite wonderful.” —New York Times Book Review

“As homey at times as chamomile tea but spiked with pointed undercurrents, this is a real treat for a reader who can appreciate its quiet pleasures.” —Kirkus Reviews (starred review)

“An enthralling story of love and loss, a real literary treasure. One of the most original novels of the year.” —Robert Harris, author of An Officer and a Spy

“A moving tale of mortality and the passage of time…affecting…Preston is subtle but precise in his characterizations, and meticulous with period detail.” —Publishers Weekly

“The Dig offers both a vividly reimagined slice of history and a tantalizing rumination on what remains after we cease to exist.” —Booklist

“Intensely human…[The Dig] constantly reminds us, rediscovering the past is a deeply equivocal pursuit…Preston keeps an iron grip on the reader's attention…a wonderful, evocative book. From his simple tale of dirt, Preston has produced the finest gold.” —The Guardian

“A rich vein of dry humor runs throughout.” —Evening Standard

“A moving novel that coheres wonderfully as it progresses.” —Spectator

“A delicate evocation of a vanished era.” —Sunday Times

“Beautifully written…there is a true and wonderful ending to the story.” —Bill Wyman, Mail on Sunday

“So absorbing that I read right through lunchtime one day, and it's not often I miss a meal.” —Nigella Lawson