Ghosts of Atlantis: How the Echoes of Lost Civilizations Influence Our Modern World (Paperback) 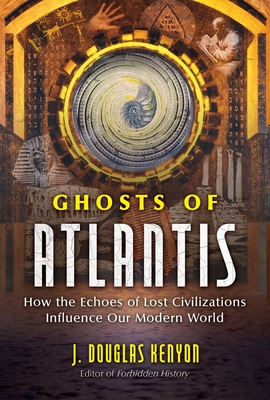 • Explores the true age of the Sphinx, the Stone Age high-tech found at Gobekli Tepe, the truth of Rapa Nui (Easter Island), the Zep Tepi monuments of Egypt, the mysteries of the Gulf of Cambay, and what lies beneath the ice of Antarctica

We live within the ruins of an ancient civilization whose vast size has rendered it invisible. Remembered in myth as Atlantis, Lemuria, or other lost world archetypes, the remains of this advanced civilization have lain buried for millennia beneath the deserts and oceans of the world, leaving us many mysterious and inexplicable clues.

Investigating the perennial myth of a forgotten fountainhead of civilization, J. Douglas Kenyon presents extensive physical and spiritual evidence of a lost great culture, the collective amnesia that wiped it from planetary memory, and the countless ways ancient catastrophes still haunt modern civilization. He explores evidence of advanced ancient technology, anomalous ancient maps, extraterrestrial influence, time travel, crystal science, and the true age of the Sphinx. He examines evidence of Atlantis in the Bible and ancient Armageddon, the Stone Age high-tech found at Gobekli Tepe, the truth of Rapa Nui (Easter Island), the Zep Tepi monuments of Egypt, the mysteries of the Gulf of Cambay, and what lies beneath the ice of Antarctica. He looks at extinction events, Earth’s connection with Mars, and how our DNA reveals that humanity has had enough time to evolve civilization and lose it more than once.

Exploring the advanced esoteric and spiritual knowledge of the ancients, Kenyon shows that the search for Atlantis and other lost worlds reflects the search for the lost soul of humanity. Drawing upon Velikovsky’s notion of a species-wide amnesia caused by the trauma of losing an entire civilization, he reveals how the virtual ruins of a lost history are buried deep in our collective unconscious, constantly tugging at our awareness. As Kenyon reveals, by overcoming “the Great Forgetting,” humanity can find its way out of the haunted labyrinth in which we find ourselves lost today and rediscover the heights of spiritual and technological advancement of our ancient ancestors.

For almost a quarter-century, J. Douglas Kenyon was the editor and publisher of Atlantis Rising magazine. He is the author and editor of several books, including Forbidden History and Forbidden Science, and the writer, producer, and narrator of several documentary films, including Technologies of the Gods, Clash of the Geniuses, and The Atlantis Connection. He lives in Florida.

“A great new addition to the world of ancient mysteries, opening a fascinating chapter in the mysteries of Atlantis.”
— Andrew Collins, author of Göbekli Tepe: Genesis of the Gods

“Ghosts of Atlantis introduces a thought-provoking sampling of Atlantean themes and their ramifications. With his inviting style, Kenyon explores Atlantis in popular culture and our subconscious, archaeological and scientific evidence for forgotten civilizations, religious implications, conspiracy theories, extraterrestrials, time travel, cosmic catastrophes, and much more. Ghosts of Atlantis provides numerous insights and a fascinating path to navigate through the Atlantis phenomena.”
— Robert M. Schoch, Ph.D., author of Forgotten Civilization

“Kenyon has a superior perspective on the history and progress of alternative viewpoints. Ghosts of Atlantis is a valuable and timely contribution to the field--it brilliantly elucidates how similar the fundamental ideological forces in the world play out, regardless of the period of time or culture we live in. Beautifully written.”
— Chris Dunn, author of Lost Technologies of Ancient Egypt

“Ghosts of Atlantis takes the reader on a magical mystery tour through many of the great puzzles and enigmas of our world, expertly weaving them together into a cohesive and alternative picture of our most ancient past. A deeply thought-provoking compendium that updates and reenergizes this long-running debate and will surely keep alive the age-old question of humanity’s lost past and its true origins. A tour de force that delivers a timely wake-up call to scientism in all its forms; a work that will surely be discussed and debated for many years to come.”
— Scott Creighton, author of The Great Pyramid Void Enigma

“Kenyon has written the widest-ranging, most comprehensive, and most convincing argument that a prehistoric civilization actually existed and was all but erased from human memory by a natural catastrophe. A must-read.”
— Gregory L. Little, Ed.D., coauthor of Denisovan Origins

“No one handles the mysteries of protohistory more deftly than Doug Kenyon. He has done more than any single individual in recent time to uncover the secrets of planet Earth, once and for all dispelling the orthodox myth of a barbaric ‘Stone Age.’ His new book is a magnificent synopsis of our knowledge of the advanced arts and sciences of lost civilizations.”
— Susan Martinez, Ph.D., author of The Mysterious Origins of Hybrid Man

“Skillful writing guides us smoothly through complex subjects toward an exciting place where mysticism and materialism might intersect to provide a greater understanding of the universe. An exciting book, wrapping deep subjects in a fascinating style that invites you to delve into the writer’s intriguing multiverse vision.”
— Rand Flem-Ath, coauthor of Atlantis beneath the Ice

“Kenyon offers us a thorough, up-to-date survey of the current state of the world of alternative science. He’s an accomplished researcher and author, as is convincingly demonstrated by this book. May the ghosts of Atlantis continue to haunt a world gone astray!”
— Michael A. Cremo, author of Forbidden Archeology

“Ghost of Atlantis is a fascinating read, integrating many threads of research. This book allows for hope--we’ve collectively forgotten much wisdom, yet it’s not too late to recognize our spiritual nature and choose to build a higher civilization.”
— Jeane Manning, author of The Coming Energy Revolution

“A riveting read. Kenyon presents nonstop and impossible-to-ignore evidence for humanity’s amnesia and offers compelling arguments for what lost memory means to humanity--we ignore the truth of the past at our peril.”
— Julie Loar, author of Goddesses for Every Day

“Kenyon has an ability no one else has--to pull in the fullness of place, timeframe, story, and fact so a larger view emerges. Ghost of Atlantis is his capstone. This one book ties together how the many worlds of the past reveal the singular path we humans have taken since the beginnings of all beginnings. I give Doug a huge thank-you for what he has done in this incredible book.”
— P. M. H. Atwater, L.H.D., author of The Forever Angels

"J. Douglas Kenyon, former editor and publisher of Atlantis Rising magazine and the author and editor of several books, such as Forbidden History and Forbidden Science, sifts through the global evidence mixed with inexplicable clues that may suggest how once upon a time, long, long ago, there existed remarkable ancient civilizations that were destroyed by catastrophes. He explores the myths of Atlantis, Lemuria and other legends for their possible clues. He casts a wide net in his determined search for the forgotten truth of these ancient worlds and their inhabitants, from archaeological findings, referencing anomalous ancient maps and technology, to crystal science, and, alas, he even explores the possibilities of time travel and ET influences."
— Brent Raynes, Alternate Perceptions Magazine

"A crucial and topical thread running through this new book is how many researchers seeking genuine scientific advancement are thwarted by the reductionist-materialist paradigm of the establishment."
— Geoff Ward, writer, poet, tutor and mentor in literature and creative writing

"A comprehensive book indicating evidence for a lost great culture and the way in which it still haunts the collective unconscious, even though much of the story is not taken seriously in academic circles."
— David Lorimer, Paradigm Explorer