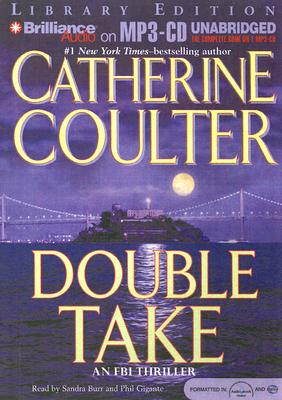 By Catherine Coulter, Sandra Burr (Read by), Phil Gigante (Read by)
$39.25
Email or call for price.

The police are convinced that Julia Ransom was guilty of the brutal murder of her husband, renowned psychic August Ransom. But after six months of investigation and media frenzy, she is free of their scrutiny, because of the lack of evidence. One afternoon she walks from her Pacific Heights home to Fisherman's Wharf, alone, unwatched - and, she realizes, happy. Standing at the railing on Pier 39, she savors the sounds around her - tourists, countless seals on the barges - and for a moment enjoys the sheer normalcy of it all. It suddenly comes to an end when a respectable-looking man distracts her with conversation before striking her unconscious and heaving her over the railing into San Francisco Bay. If it weren t for Special Agent Cheney Stone, Julia would ve drown. Cheney quickly realizes the attempt on Julia's life has to connect to the murder of her husband, and reopens the investigation with the SFPD. Meanwhile, in Maestro, Virginia, Sheriff Dixon Noble - last seen in Point Blank - learns about a woman named Charlotte Pallack, whose extraordinary resemblance to his vanished wife, Christie, gone for three years, sends him across the country. Although in his heart he knows that this woman can t possibly be his missing wife, Dix is compelled to see her with his own eyes. In San Francisco, Dix's and Cheney's paths cross, brought together by FBI Special Agents Dillon Savich and Lacey Sherlock. All four begin to unlock the mystery behind Charlotte Pallack's identity, as well as the forces behind Julia Ransom's attempted murder and the vicious murder of her husband. The most fascinating aspect of the case is the extraordinary cast of psychics they meet as they push deep into the intriguing and complex world of visions, mind benders, and communications to the dead. As the stakes and the body count rise, Savich, Sherlock, Dix, and Cheney fight for answers - and their lives.