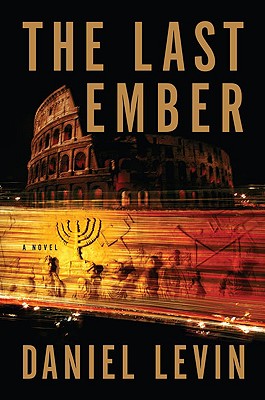 Jonathan Marcus, a young American lawyer and former doctoral student in classics, is summoned to Rome for a case and stumbles across a message hidden inside an ancient stone fragment. The discovery propels him and UN preservationist Dr. Emili Travia into a coldblooded modern plot to erase every remnant of Jewish and Christian presence from Jerusalem's Temple Mount, in the process redefining history itself.

"The Last Ember, written with pathos and conviction, represents a much needed literary protest against modern and ancient historical revisionism."
-Elie Wiesel, bestselling author of Night

"A smart, sophisticated thirller that entertains as it educates, The Last Ember is engrossing. Levin knows his stuff and it shows-- to the reader's great pleasure. Fans of The Da Vinci Code will devour it happily!"
-Christopher Reich, bestselling author of Numbered Account

"In his fast-paced, erudite, and original debut, Daniel Levin reveals a vivid world where archaeological, legal, and religious secrets swirl together into a thrilling nexus. Its rich texture and global cast of characters ignite genuine suspense and intrigue. Readers will savor this novel and await more blockbuster Daniel Levin adventures."
-Matthew Pearl, author of The Dante Club

"What a glorious journey from the tumultuous world of today's Middle East to the imperial world of Roman antiquity and then back. With a flair for detail, drama and elegant prose, Daniel Levin keeps us transfixed by his page-turning tale of deception, politics, history and life."
-Alan Dershowitx, Harvard Law School

"A banquet of everything I crave: history, conspiracy, secrets, action, adventure. Strap yourself in and hold on for some heart-throbbing, throat-grabbing, pedal-to-the-medal pacing. Levin captivates the reader with both plausibility and imagination. The Last Ember is a prize to be savored. A superb debut from a talent that bears watching."
-Steve Berry, author of The Charlemagne Pursuit and The Amber Room

"Levin's religious and archaeological thriller has all the elements needed to appeal to Da Vinci Code fans: long-buried secrets, hidden puzzles based on ancient religious texts, and a race around the Mediterranean."
-Booklist