Transcending the Speed of Light: Consciousness, Quantum Physics, and the Fifth Dimension (Paperback) 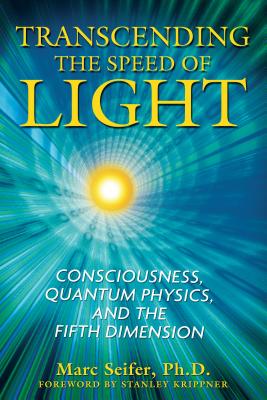 Since the introduction of Descartes’ dualism in the seventeenth century, the mind and the physical world have been viewed as disconnected entities. Yet qualities of mind such as awareness, purposeful action, organization, design, and even decision-making are present within the structure of matter and within the dimensions of space and time.

The space-time continuum of scientists generally ignores the realm of the mind, though phenomena such as imaginary numbers, used by Einstein to combine space with time, are concepts that only exist in the mind. Marc Seifer contends that the inadequacy of four-dimensional models to account for our experience of mental phenomena points to the consciousness of the mind as a higher organizing principle, a fifth dimension where thoughts are as real and quantifiable as our familiar physical world. He shows that because thought enables us to move backward and forward through time--reflecting on the past and making plans for the future--this fifth dimension of mind breaks the laws of relativity, thereby transcending the speed of light. His extensive study of this fifth dimension ranges from relativity and ether theory to precognition, telepathy, and synchronicity, all from the perspective of the conscious universe.

Marc J. Seifer, Ph.D., teaches psychology at Roger Williams University. He has studied under Bruno Bettelheim, Herbert Meltzer, and Stanley Krippner and is the author of several books, including Transcending the Speed of Light, Inward Journey: From Freud to Gurdjieff and the acclaimed Wizard: The Life & Times of Nikola Tesla. He lives in Saunderstown, Rhode Island.

Stanley Krippner, Ph.D., is a professor of psychology at Saybrook University and past president of the Association for Humanistic Psychology. The recipient of several distinguished awards and author and coauthor of many books, including Demystifying Shamans and Their World, he lives in San Rafael, California.

“Marc Seifer has made the difficult easy to understand as he covers such broad topics as cosmological coincidences, new theories on gravity, and higher states of consciousness. This book generates fresh ideas on the link between thoughts, the physical universe, and the speed of light. Transcending the Speed of Light is a bold new adventure into the exciting world of consciousness exploration.”
— Uri Geller, paranormalist

“I highly recommend this book to any and all readers who are seriously interested in the puzzling problem of the nature of mind and consciousness. I most enthusiastically endorse Marc’s work.”
— Col. Tom Bearden (retired), author of Excalibur Briefing

“How is it possible for consciousness to exist in the physical universe? This is the classic mind-body problem that has eluded philosophers for many generations. Now it appears that answers are within reach. The depth of Marc Seifer’s scholarship and the clarity of his thinking make this book a worthwhile read for anyone interested in the frontiers of consciousness research.”
— Jeffrey Mishlove, Ph.D., Dean of Consciousness Studies Research, University of Philosophical Researc

"The author goes to great length to encourage the reader to connect the dots between phenomena understood and occurrences and relationships more abtruse. It is provocative and thoughtful and it should be showcased for its colorful cover in the Psychology, Science, and Philosophy areas of our stores."
— Thomas Peter von Bahr, New Age Retailer, March 2009

"I recommend this book to those who are looking for a more factual, scientific understanding of consciousness and how it exists and expresses in the physical world. This book gives an incredible, 'ah-hah' understanding of the universe and our existence with consciousness in it."
— Barbara Cronin, CirclesofLight.com, Nov 2009

"This is not a volume to be undertaken lightly, but the author does an admirable job of presenting the information in a manner that keeps the reader's eyes from glazing over."
— D. Tigermoon, The Pagan Review, June 2010