Teachings of the Santería Gods: The Spirit of the Odu (Paperback) 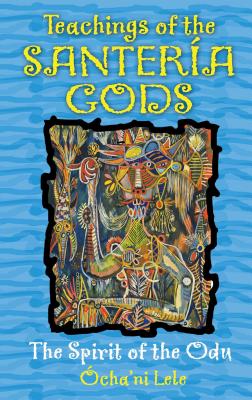 The first book to explore the sacred myths of Santería

• Includes more than 100 myths, stories, and histories about the odu and the orishas

• Reassembles the oral fragments from the African diaspora into coherent stories

• Demonstrates that the African peoples, specifically the Yoruba, were deeply spiritual

At the core of the diloggún--the sacred divination system of Santería--are the sacred stories known as the patakís, narratives whose themes are as powerful and relevant today as they were in the minds of the ancient Yoruba who safeguarded them. Each patakí is connected to one or more of the 16 odu, the principal creative forces of Santería. Some recount the lives of orishas on earth, others the lives of individuals in heaven, and some tell of the odu themselves, for even they once walked the earth as mortals.

The first book to explore these ancient African stories in English, Teachings of the Santería Gods recounts more than 100 of these sacred parables, including many stories reassembled from the oral tradition of the African diaspora. Ranging from creation myths to what happens when a love potion works far too well, these stories share the wisdom and spirituality of the Yoruba people of ancient Africa and form the living, oral bible of one of the world’s fastest-growing faiths.

Author of The Secrets of Afro-Cuban Divination, Ócha'ni Lele (1966-2019) was immersed in the underground culture of Orisha worship in 1989. By 1995 he had received several initiations in both Santeria and the Congo faith Palo Mayombe and in 2000 he made Ocha and was crowned a Santeria priest.

“There is no more magical way to feel close to the orishas than through the patakís. It is there that one is transported to one’s imagination. Ócha’ni Lele has a very spiritual manner in elevating my imagination through his writing, which reveals a special touch. ¡Maferefun orichas! What is seen is not questioned! This is a special book for those of us who go forth from the heart, without malice. Ócha’ni Lele, my dear, I congratulate you!”
— Ivy Queen, vocalist, musician, and Queen of Reggaeton

“This book is a page turner. Ócha’ni Lele relates these sacred stories with the ease of a knowledgeable narrator while drawing clarity and meaning out of the religion’s complex chorus of voices. This book moves the deep spirituality of the religion away from ethnography and connects the sacred to religious studies where it is well overdue.”
— Oba Ernesto Pichardo, Church of the Lukumi Babalu Aye

"If you have any interest in Santeria, or in a story well-told, then you should pick up Ocha'ni Lele's Teachings fo the Santeria Gods. Don't simply read it, savor it. Each of these stories is a gem worth examining, and Lele is the wise jeweler joyfully pointing out each facet."
— Star Foster, Pantheon: The Pagan Blog at Patheos, September 2010

"For the first time, one hundred of the ancient African stories known as pataki have been made available in English. It was a gargantuan labor of love for the author."
— Anna Jedrziewski, New Age Retailer, September 2010

"Loaded with stories that provide entertainment and unique perspectives, Teachings of the Santeria Gods is an excellent book for those looking to learn about Santeria or African folklore."
— The Magical Buffet, October 2010