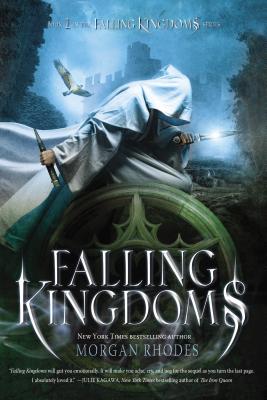 This is book number 1 in the Falling Kingdoms series.

“What's the difference between those who are raised to be great and those who need to become great? Falling Kingdoms follows four teenagers, some royal, on their paths towards becoming legends in their own lands. Subterfuge, magic, battles, and politics collide as their disconnected lives begin to intertwine in ways that the reader cannot predict. I can't wait to read the next one!”
— Hannah Johnson-Breimeier, Next Chapter Bookshop, Mequon, WI

Princess Cleo of Mytica confronts violence for the first time in her life when a shocking murder sets her kingdom on a path to collapse. Once a privileged royal, Cleo must now summon the strength to survive in this new world and fight for her rightful place as Queen.

The King of Limeros’s son, Magnus, must plan each footstep with shrewd, sharp guile if he is to earn his powerful father’s trust, while his sister, Lucia, discovers a terrifying secret about her heritage that will change everything.

Rebellious Jonas lashes out against the forces of oppression that have kept his country cruelly impoverished—and finds himself the leader of a people’s revolution centuries in the making.

Witches, if found, are put to death, and Watchers, immortal beings who take the shape of hawks to visit the human world, have been almost entirely forgotten. A vicious power struggle quickly escalates to war, and these four young people collide against each other and the rise of elementia, the magic that can topple kingdoms and crown a ruler in the same day.
Morgan Rhodes is the New York Times bestselling author of the Falling Kingdoms series. Under another pen name, she's an award winning author of more than two dozen novels. Morgan lives in Southern Ontario, where she’s currently hard at work on the next Falling Kingdoms book.
PRAISE for the FALLING KINGDOMS series:

"Morgan Rhodes has created a rich, living fantasy world and characters that immediately draw the reader in. This is one of those series you can't help but be obsessed with. I can't wait to see what happens next!" —Richelle Mead, #1 New York Times bestselling author of Vampire Academy and The Glittering Court