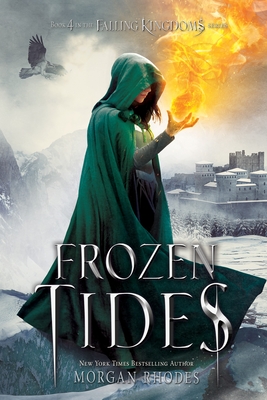 This is book number 4 in the Falling Kingdoms series.

The plans are laid and the players are determined . . . but nothing can prepare these unlikely warriors for what the elemental gods of Mytica have in store.

CLEO: Reeling after a shocking realization about Magnus, Princess Cleo must cast aside her feelings and look toward her kingdom with the eyes of a queen.

MAGNUS: The steely prince of Limeros is once again torn between love and duty, leaving him wondering whether he's strong enough to rule his people.

LUCIA: Heartbroken and blind with fury, the betrayed sorceress allies with the awoken Fire god, who also seeks revenge.

JONAS: The defeated rebel leader reunites with Princess Cleo, only to become a pawn in the dangerous hunt for the elusive Kindred.

KING GAIUS: A desperate King of Blood flees Mytica and sails to Kraeshia, where he attempts to ally with the famously brutal emperor across the Silver Sea.
Morgan Rhodes is the New York Times bestselling author of the Falling Kingdoms series. Under another pen name, she's an award-winning author of more than two dozen novels. Morgan lives in Southern Ontario. Connect with her on Twitter @MorganRhodesYA or visit fallingkingdoms.com for more info.
PRAISE for the FALLING KINGDOMS series:

"Morgan Rhodes has created a rich, living fantasy world and characters that immediately draw the reader in. This is one of those series you can't help but be obsessed with. I can't wait to see what happens next!" —Richelle Mead, #1 New York Times bestselling author of Vampire Academy and The Glittering Court