Travels With John And Gwen: A Combat Medic and His Wife Explore the World After WWII (Paperback) 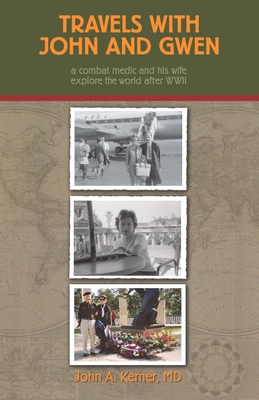 Travels With John And Gwen: A Combat Medic and His Wife Explore the World After WWII (Paperback)

By John a. Kerner

Follow a San Francisco doctor who served as a combat medic in Europe in World War II as he travels the world with his wife, Gwen, in the years following the war. For six decades, John and Gwen Kerner made ninety-plus trips to more than sixty countries and six continents.

In this captivating chronicle, John vividly recalls an innocent, bygone time for travel, the 1950s and '60s when airlines pampered every passenger; travelers made innocent, lifelong connections with complete strangers outside of train stations and in restaurants; and many cultures were still untouched by hordes of foreign tourists.

He recounts what it was like to go back to places in peacetime that he last saw in the heat of war. This book is also a poignant tribute to his late wife, Gwen, who brightened every trip of theirs with her wit, intellect, grace, and charm.