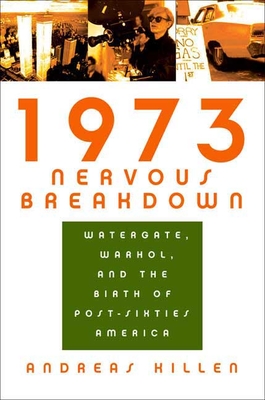 By Andreas Killen
Email or call for price
Out of Print - This Title is Unlikely to be Available.

An engaging and eye-opening dissection of a watershed year in American history.

Tumultuous and exciting, 1973 marked the end of the 1960s and the birth of a new cultural sensibility. A year of shattering political crisis, 1973 was defined by defeat in Vietnam, Roe v. Wade, the oil crisis and the Watergate hearings. It was also a year of remarkable creative ferment. From landmark movies such as The Exorcist, Mean Streets, and American Graffiti to seminal books such as Fear of Flying and Gravity's Rainbow, from the proto-punk band the New York Dolls to the first ever reality TV show, The American Family, the cultural artifacts of the year testify to a nation in the middle of a serious identity crisis. 1973 Nervous Breakdown offers a fever chart of a year of uncertainty, fragility, and change, a year in which post-war prosperity crumbles and modernism gives way to postmodernism. Killen ransacks newspapers, magazines, novels, films, TV shows and music to bring to life traumatic events. The fate of the family, the future of the presidency, the sanity of the masses--all of these bedrocks of society are threatened. 1973 marks the pivotal year of a decade whose impact on our own cultural zeitgeist remains considerable--a decade in sore need of liberation both from the long shadow of the 1960s and from the backwards shadow cast by the 1980s. With this book, Andreas Killen offers a lively and revelatory analysis of one of the most important periods in the second half of the 20th century.

Andreas Killen is Assistant Professor of History at the City College of New York. He holds a Ph.D. from New York University, where he specialized in modern cultural and urban history. He has been the holder of an Andrew Mellon Fellowship at UCLA, was a Visiting Fellow at the Max Planck Institute in Berlin, Germany, and has been the recipient of a grant from the National Science Foundation. His writing has appeared in Salon and the New York Times Magazine. His book Berlin Electropolis will be published later this year by the University of California Press.