Whispering in the Giant's Ear: A Frontline Chronicle from Bolivia's War on Globalization (Paperback) 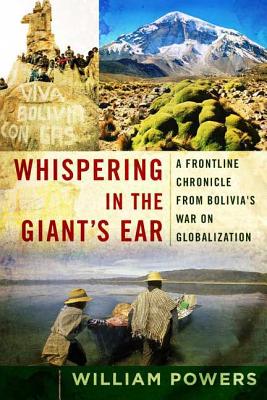 Long the obscure "Tibet of South America", Bolivia emerged as a world flashpoint during the four years William Powers lived there as an aid worker. CNN and the New York Times have shown images of Aymara women in bowler hats standing down tanks; citizen protests have ousted multinationals and two pro-globalization presidents. In Whispering in the Giant's Ear, Powers brings alive the recent struggles of the Bolivian people. When he arrives in the rainforest, he meets an extraordinary Chiquitano Indian named Salvador who is fighting the extinction of his people. At the same time, the clock ticks for three multinational energy companies forced to curb the global warming. Both goals depend upon the survival of a stretch of pristine jungle. But as Indians and oil giants join to launch the world's largest Kyoto project - using forests to absorb dangerous planetary greenhouse gasses - Salvador's life is threatened by loggers collaborating with a racist Bolivian oligarchy. The quest for a single rainforest is subsumed in a movement of national liberation. Whispering in the Giant's Ear goes beneath the headlines, gracefully weaving memoir, travel, history, and reportage into an unforgettable chronicle of a "poor little rich country" attempting to engage the world without losing its soul.

William Powers has worked for over a decade in development aid in Latin America, Africa, Washington, D.C., and Native North America. His project in the Bolivian Amazon won the 2003 Harvard University JFK School prize for innovation. He is author of the Liberia memoir Blue Clay People, and contributor to two recent books on tropical biodiversity. His essays have appeared in the New York Times and International Herald Tribune, and he provides commentary for World Vision Radio and NPR. Powers, who is still based in Bolivia, is 2004-2005 recipient of the Open Door Foundation fellowship for nonfiction