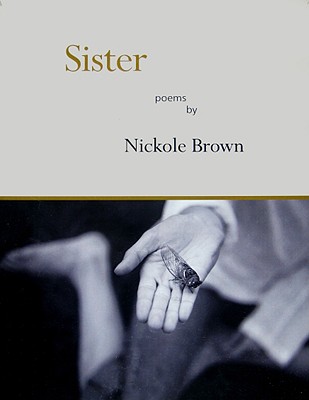 Nickole Brown writes in a voice that is simultaneously vernacular and lyrical. It is a voice thick with the humidity and whirring cicadas of Kentucky, but the poems are dangerous, smelling of the crisp cucumber scent of a copperhead about to strike. Epistolary in nature, and with a novel's arc, Sister is a story that begins with a teen giving birth to a baby girl--the narrator--during a tornado, and in some ways, that tornado never ends.

In the hands of a lesser poet, this debut collection would be a standard-issue confession, a melodramatic exercise in anger and self-pity. But melodrama requires simple villains and victims, and there is neither in this richly complex portrait. Ultimately, Sister is more about the narrator's transgressions and failures, more about her relationships to her sister and their mother than about that which divided them. With equal parts sass and sorrow, these poems etch out survival won not with tender-hearted reflections but by smoking cigarettes through fly-specked screens, by using cans of aerosol hair spray as a makeshift flamethrowers, and, most cruelly, by leaving home and trying to forget her sister entirely. From there, each poem is a letter of explanation and apology to that younger sister she never knew.

Sister recounts a return to a place that Brown never truly left. It is a book of forgiveness, of seeking what is beyond mere survival, of finding your way out of a place of poverty and abuse only to realize that you must go back again, all the way back to where everything began--that warm, dark nest of mother.