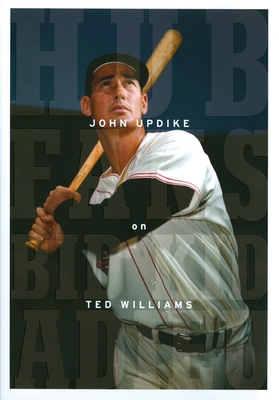 
Usually Ships in 1-5 Days
On September 28, 1960—a day that will live forever in the hearts of fans—Red Sox slugger Ted Williams stepped up to the plate for his last at-bat in Fenway Park. Seizing the occasion, he belted a solo home run—a storybook ending to a storied career.

In the stands that afternoon was twenty-eight-year-old John Updike, inspired by the moment to make his lone venture into the field of sports reporting. More than just a matchless account of that fabled final game, Hub Fans Bid Kid Adieu is a brilliant evocation of Williams’ entire tumultuous life in baseball.

Now, on the fiftieth anniversary of the dramatic exit of baseball’s greatest hitter, The Library of America presents a commemorative edition of Hub Fans, prepared by the author just months before his death. To the classic final version of the essay, long out-of-print, Updike added an autobiographical preface and a substantial new afterword.
John Updike (1932–2009) was born in Shillington, Pennsylvania. He graduated from Harvard College in 1954, and spent a year in Oxford, England, at the Ruskin School of Drawing and Fine Art. From 1955 to 1957 he was a member of the staff of The New Yorker. He is the author of more than sixty books, including collections of short stories, poems, essays, and criticism. His novels won the Pulitzer Prize, the National Book Award, the National Book Critics Circle, and the Howells Medal, among other honors.