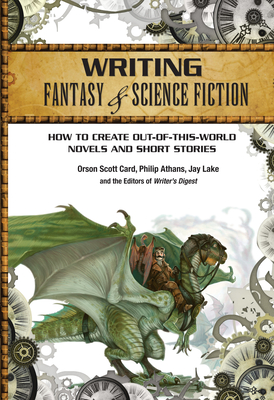 Do you envision celestial cities in distant, fantastic worlds? Do you dream of mythical beasts and gallant quests in exotic kingdoms? If you have ever wanted to write the next great fantasy or science fiction story, this all-in-one comprehensive book will show you how. Writing Fantasy & Science Fiction is full of advice from master authors offering definitive instructions on world building, character creation, and storytelling in the many styles and possibilities available to writers of speculative fiction.

• How to build, populate, and dramatize fantastic new worlds.
• How to develop dynamic and meaningful themes that will expand the cannon of sci-fi and fantasy storytelling.
• Exciting subgenres such as steampunk, as well as new developments in the sci-fi and fantasy genres.
• How to imbue your tales with historically accurate information about world cultures, legends, folklore, and religions.
• Detailed descriptions of magic rituals, fantastic weapons of war, clothing and armor, and otherworldly beasts such as orcs, giants, elves, and more.
• How societies, villages, and castles were constructed and operate on a day-to-day basis.
• Astounding methods of interstellar travel, the rules of starflight, and the realities and myths of scientific exploration.
• How to generate new ideas and graft them to the most popular themes and plot devices in sci-fi and fantasy writing.
The boundaries of your imagination are infinite, but to create credible and thrilling fiction, you must ground your stories in rules, facts, and accurate ideas. Writing Fantasy & Science Fiction will guide you through the complex and compelling universe of fantasy and science fiction writing and help you unleash your stories on the next generation of readers and fans.

Orson Scott Card is the bestselling author of Ender's Game, sixty other books, assorted plays, comics, and essays and newspaper columns. His work has won multiple awards, including back-to-back wins of the Hugo and the Nebula Awards.

Philip Athans is the founding partner of Athans & Associates Creating Consulting and the New York Times best-selling author of Annihilation and a dozen other fantasy and horror books, including The Guide to Writing Fantasy & Science Fiction, The Haunting of Dragon's Cliff and Devils of the Endless Deep. Born in Rochester, New York, he grew up in suburban Chicago, where he published the literary magazine Alternative Fiction & Poetry. His blog, Fantasy Author's Handbook, is updated every Tuesday, and you can follow him on Twitter (@PhilAthans).

Jay Lake is the author of the Mainspring and Green series from Tor, as well as several independent press novels and numerous short stories. In 2013, his steampunk novella, "The Stars Do Not Lie," was nominated for the Nebula, Hugo, and Locus awards. He lives and writes in Portland, Oregon.