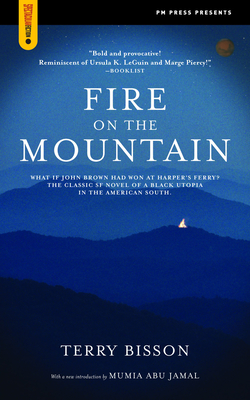 
Usually Ships in 1-5 Days
Presenting an alternative version of African American history, this novel explores what might have happened if John Brown’s 1859 raid on Harper’s Ferry had been successful. Chronicling life in a thriving black nation founded by Brown in the former southeastern United States, this dramatic story opens 100 years later, just as Nova Africa is poised to celebrate its first landing of a spacecraft on Mars. The prosperous black state will soon be tested when the granddaughter of John Brown returns from Africa to reunite with her daughter and share with her a secret that will alter their lives forever.
Terry Bisson is the host of SF in SF, a popular science-fiction reading-series. He is the author of several books, including The Cat’s Pajamas, Greetings & Other Stories, and Numbers Don’t Lie. He lives in San Francisco.
“You don’t forget Bisson’s characters, even well after you’ve finished his books . . . [this book] does for the Civil War what Philip K. Dick’s The Man in the High Castle did for World War II.”  —George Alec Effinger, author, When Gravity Falls

“Few works have moved me as deeply, as thoroughly  . . . With this single poignant story, Bisson molds a world as sweet as banana cream pies, and is briny as hot tears." —Mumia Abu amal, death row prisoner and author, Live from Death Row

"A slender novel, but it does the science fiction trick of making you step back from your own world and see it more clearly, and it does so while wrenching your heart and setting your pulse pounding. All in all, one of the best alternate histories I've read."  —Cory Doctorow, Boing Boing

"A book that continues to provoke questions about how and why our world is the way it is—and how it might be different."   —Indypendent (NYC)