A Black & White Statement: The Story of the Rondos (PM Audio) (CD-Audio) 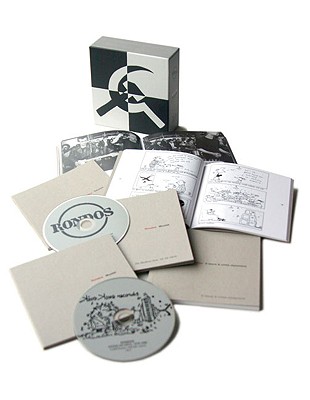 The box set contains two CDs and four books, which together tell the story of the Rondos from the period 1978–1980.
• CD 1 with a Rondos live concert from 1978
• CD 2 with all the Rondos songs previously released on vinyl between 1978-80
• Art in Revolution Calls: 228 page photo book from the Rondos archives
• A Black & White Statement: 84 page autobiography (bi-lingual) of the Rondos.
• Destroy the Entertainment: 60 page lyric book, in English
• Graffiti and Aerosols: 48 page comic book, with two new adventures of Red RatBetween 1978-80, the Rondos did 50 live shows. They released their records on their own independent label, King Kong Records, and together with three other bands (Rode Wig, Tändstickor Shocks, and Sovjets) formed the Rotterdam music collective “Red Rock,” with whom they shared gigs, equipment, and rehearsal space. Punk for the Rondos obviously meant more than “entertainment,” hence their slogan “Punk = Resistance.” Their independently published fanzine Raket (“Rocket”) quickly became the mouthpiece of many Dutch youth who turned their backs on consumerist society.

The Rondos operated from the house called Huize Schoonderloo, a building that they saved from demolition and turned into a living and working space. Here they operated a print shop, a rehearsal room, and the alternative bookshop “Raketbasis” (“Rocketbase”).

The Rondos gathered a fanatic and devoted following, but unhappy with the fact that this devotion threatened to turn them into punk heroes, which had nothing to do with their own idea of punk, the Rondos called it a day.

The Rondos stem from the same generation of bands such as The Ex (in the Netherlands) and Crass (in England) with whom they shared equipment, stages, floor space, and in some cases, band members.