Cambodia and Kent State: In the Aftermath of Nixon's Expansion of the Vietnam War (Paperback) 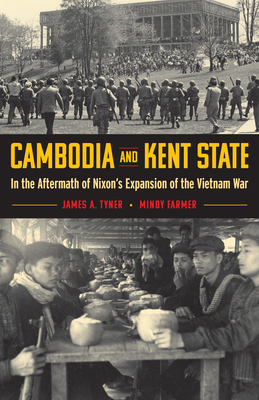 President Nixon's announcement on April 30, 1970, that US troops were invading neutral Cambodia as part of the ongoing Vietnam War campaign sparked a complicated series of events with tragic consequences on many fronts.

In Cambodia, the invasion renewed calls for a government independent of western power and influence, eventually resulting in a civil war and the rise of the Khmer Rouge. Here at home, Nixon's expansion of the war galvanized the longstanding anti-Vietnam War movement, including at Kent State University, leading to the tragic shooting deaths of four students on May 4, 1970.

This short book concisely contextualizes these events, filling a gap in the popular memory of the 1970 shootings and the wider conceptions of the war in Southeast Asia. In three brief chapters, James A. Tyner and Mindy Farmer provide background on the decade of activism around the United States that preceded the events on Kent State's campus, an overview of Cambodia's history and developments following the US incursion, and a closing section on historical memory--poignantly tying together the subject matter of the preceding chapters.

As we grapple with the legacy of the Kent State shootings, Tyner and Farmer assert, we should also grapple with the larger context of the protests, of the decision to bomb and invade a neutral country, and the violence and genocide that followed.

James A. Tyner is professor of geography at Kent State University and a fellow of the American Association of Geographers. He is the author of 18 books, including War, Violence, and Population: Making the Body Count, which received the AAG Meridian Book Award for Outstanding Scholarly Contribution to Geography. Mindy Farmer is director of the May 4 Visitors Center and assistant professor of history at Kent State University. Previously she served as the founding education specialist at the federal Richard Nixon Presidential Library and Museum.