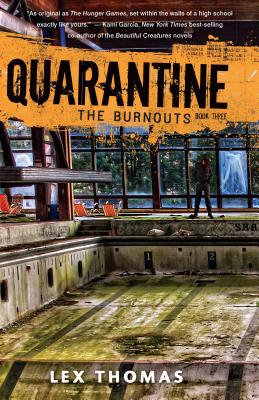 This is book number 3 in the Quarantine series.

Readers of The Maze Runner and Divergent will devour this dark survival series that's Lord of the Flies in a 21st-century high school setting.

In the third Quarantine book, David and Will are alive...but on the outside of McKinley High. Lucy is the last of the trinity left inside, where Hilary will exact a deadly revenge before taking over McKinley and bringing one final reign of terror to the school before the doors open for good. But the outside world is just as dangerous for carriers of the virus.
"Lex Thomas is the pen name for the writing team of Lex Hrabe and Thomas Voorhies.Lex received a BA in Drama and English from the University of Virginia and has worked as an actor and writer. He lives in Virginia with his wife and two daughters. Thomas graduated with a Bachelors of Fine Arts from the Rhode Island School of Design, and now writes and exhibits his realist oil paintings in Los Angeles.

Lex and Thomas met in a writers' group. Friends first, they bonded over their mutual fascination with B-movies. In 2005, they became a screenwriting team and found that writing with a friend is much more fun than doing it alone. Visit them at www.lex-thomas.com.""