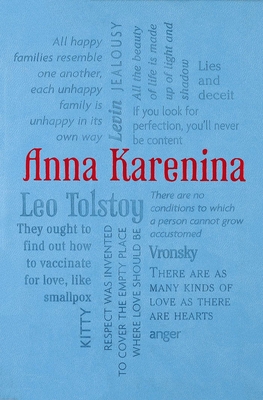 No home library is complete without the classics! Anna Karenina is a keepsake to be read and treasured.

First published in the late 19th century, Anna Karenina, by famed Russian writer Leo Tolstoy, is widely regarded as one of the greatest novels of all time. Chronicling the turbulent affair between Anna Karenina and Count Vronsky, Tolstoy weaves a parallel plot of self-discovery and a turn to religion by character Konstantin Levin that is thought to be autobiographical. The result is a tale of jealousy, faith, hypocrisy, passion and progress set amidst the social change occurring in Russia in the 1870s.  Now available as part of the Word Cloud Classics series, the novel is a must-have addition to the libraries of all classic literature lovers.

About the Word Cloud Classics series:

Classic works of literature with a clean, modern aesthetic! Perfect for both old and new literature fans, the Word Cloud Classics series from Canterbury Classics provides a chic and inexpensive introduction to timeless tales. With a higher production value, including heat burnished covers and foil stamping, these eye-catching, easy-to-hold editions are the perfect gift for students and fans of literature everywhere.

Leo Tolstoy, or Count Lyev Nikolayevich Tolstoy (September 9, 1828 – November 20, 1910), was a Russian author, essayist, and philosopher whose contributions include two of the greatest literary masterpieces of all time, War and Peace, and Anna Karenina.

Constance Garnett (1861–1946) was an English translator of nineteenth-century Russian literature.