To Name Those Lost: A Novel (Paperback) 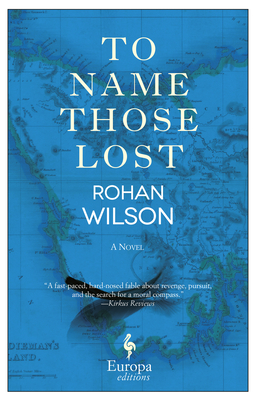 A powerful, suspenseful tale about a father and son in search of one another, this prize-winning novel based on real-life events is a classic western story of vengeance and redemption set against the sweeping, merciless grandeur of the Australian frontier.

It is the summer of 1874. Launceston, a colonial outpost on the southern Australian island of Tasmania, hovers on the brink of anarchy, teeming with revolutionaries, convicts, drunks, crooked cops, and poor strugglers looking for a break. Outlaw Thomas Toosey races to this dangerous bedlam to find his motherless twelve-year-old son before the city swallows the child whole, but he is pursued by more than just the law. Hindering his progress at every turn is a man to whom he owes a terrible debt: the vengeful Irishman Fitheal Finn, whose hooded companion hides a grotesque secret.

Brilliantly told in galloping, lyrical prose and infused with gothic tones reminiscent of Cormac McCarthy, Daniel Woodrell, and William Faulkner, To Name Those Lost is a gripping story of fatherly devotion and of one man’s search for moral bearings in a lawless society.

Rohan Wilson was named as one of the Sydney Morning Herald's Best Young Novelists in 2012. His debut novel, The Roving Party, won the 2011 The Australian/Vogel Literary Award as well as the Margaret Scott Prize, Tasmanian Literary Awards in 2013 and NSW Premier's Literary Awards 2012. To Name Those Lost won the Victorian Premier’s Literary Award and the Adelaide Festival Award for Best Novel. He lives in Tasmania.

Praise for To Name Those Lost

“A fast-paced, hard-nosed fable about revenge, pursuit, and the search for a moral compass in a place where chaos and rage and injustice set every dial wildly aquiver.”
—Kirkus Reviews

"This is a satisfying, grimy adventure about a reciprocal violence that pollutes."
—Publishers Weekly

"Fierce, brutal, brilliant, beautiful—it's hard to find enough superlatives to describe this hard gem of a novel by young Australian novelist Roahn Wilson. With a piercing literary prowess that brings to mind the prose of Cormac McCarthy, Joseph Conrad and William Faulkner, but ultimately becomes his exceptional own, he catapults us into the vicious, impoverished world of a colonial town in Tasmania of the 1870."
—Minneapolis Star Tribune

“The jarring effect of Wilson's tale is that nothing is as it appears. [...] Making heroes of killers and saviors of thieves, Wilson manages to confuse morality while avoiding amorality. This isn't a Robin Hood story, status quo turned on its head. It is a new system all together.”
—Mari Carlson, Fiction Writers Review

“Wilson’s beautiful writing stands out in harsh contrast to the world of violence, heartache, and human suffering he depicts.  [...] I loved this book, and I’m so glad to discover Rohan Wilson.”
—Historical Novels Review

“Riveting . . . a tale that readers will not be able to wrench their eyes away from.”
—Geordie Williamson, The Australian

“Wilson’s ambition may be no less than to recast the way in which historical fiction is written.”
—The Sydney Morning Herald

“A heartbreaking and violent tale I can’t wait to share with everyone.”
—Keaton Patterson, Brazos Bookstore

“Ferocious and brilliant . . . there is no denying the raw power and purity of intent of Wilson’s To Name Those Lost.”
—The Australian Book Review

“Wilson’s superbly taut novel keeps up its pace with spare punctuation and brutal dialogue in a vigorously drawn landscape feverish with the heat of a bushfire summer.”
—The Saturday Paper


Praise for Wilson's The Roving Party

"One of the best first novels I've read all year...The urgency of the chase, carefully chiseled language, exotic characters and dangerous conflict with each other–it's all here."
—Alan Cheuse, NPR's All Things Considered