Do Not Disturb: The Story of a Political Murder and an African Regime Gone Bad (Hardcover) 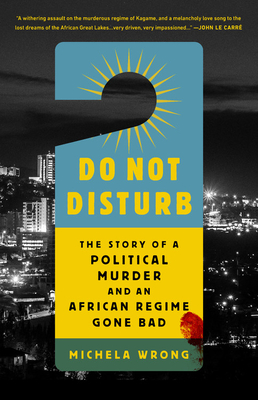 Do Not Disturb: The Story of a Political Murder and an African Regime Gone Bad (Hardcover)


Usually Ships in 1-5 Days
A powerful investigation into a grisly political murder and the authoritarian regime behind it: Do Not Disturb upends the narrative that Rwanda sold the world after one of the deadliest genocides of the twentieth century.

We think we know the story of Africa’s Great Lakes region. Following the Rwandan genocide, an idealistic group of young rebels overthrew the brutal regime in Kigali, ushering in an era of peace and stability that made Rwanda the donor darling of the West, winning comparisons with Switzerland and Singapore. But the truth was considerably more sinister.

Vividly sourcing her story with direct testimony from key participants, Wrong uses the story of the murder of Patrick Karegeya, once Rwanda’s head of external intelligence and a quicksilver operator of supple charm, to paint the portrait of a modern African dictatorship created in the chilling likeness of Paul Kagame, the president who sanctioned his former friend’s assassination.
Michela Wrong is a writer and journalist with more than twenty years' experience of covering Africa. She joined Reuters news agency in the early 1980s and was posted as a foreign correspondent to Italy, France and Ivory Coast. She became a freelance journalist in 1994, when she moved to then-Zaire and found herself covering both the genocide in Rwanda and the final days of dictator Mobutu Sese Seko for the BBC and Reuters. She later moved to Kenya, where she spent four years covering east, west and central Africa for the Financial Times.

She is the author of three books of non-fiction and a novel.

She was awarded the 2010 James Cameron prize for journalism that combines "moral vision and professional integrity." She is regularly interviewed by the BBC, Al Jazeera and Reuters on her areas of expertise. She has published opinion pieces and book reviews in the Observer, Guardian, Financial Times, New York Times, New Statesman, Spectator, Standpoint Foreign Policy magazine, and travel pieces for Conde Nast's Traveler magazine. She speaks fluent Italian and French. She is a consultant for the Miles Morland Foundation, which funds a range of literary festivals, workshops and scholarships for African writers.  Michela Wrong lives in London.
“[The book] stands out as perhaps the most ambitious attempt yet to tell the dark story of Rwanda and the region’s deeply intertwined tragedies for a general audience...There is a taut, cinematic quality to Wrong’s account."—The New York Times Book Review

“A devastating book by Michela Wrong, comes something of a reckoning — or at the very least a reassessment. Do Not Disturb is a damning j’accuse on many fronts. An extraordinarily brave piece of reporting.”—The Financial Times

“[A] Massively documented and footnoted book… her conclusions are persuasive.”—The Economist

“Superb… an epic tale of blood, bitterness and betrayal… a gripping tale.”—Times UK

“Imagine a journalist of the 1930s brave enough to investigate one of the mysterious assassinations of Stalin’s opponents who had fled abroad—and to tell that story to a world where too many people were enamored of the Soviet leader. Michela Wrong has taken on a similar job today: to use a killing to expose a man today seldom recognized as a ruthless dictator. Her skills as a writer and expert knowledge of Africa make this a chilling story.”—ADAM HOCHSCHILD, author of King Leopold's Ghost: A Story of Greed, Terror and Heroism in Colonial Africa

“In this extremely important and profoundly disturbing book, Michela Wrong sets out all the miss-steps that were ignored, all the flagrant human rights abuses that were overlooked and all the criminality for which excuses were found, until the new horrors that have been visited upon that country were perpetrated. Ms Wrong is not suggesting that we become Afro-pessimists but telling us that not only is the price of freedom eternal vigilance, but also that we must, in the words of Amilcar Cabral, ‘tell no lies, claim no easy victories’”—Archbishop Desmond Tutu, Winner of the Nobel Peace Prize

“A withering assault on the murderous Rwandan regime of Paul Kagame, and a melancholy love song to the lost dreams of the nations of Africa’s Great Lakes. Michela Wrong proves once again that she is an intrepid and highly professional researcher of the subject she knows best. It’s a major accomplishment, very driven, very impassioned.” —JOHN LE CARRÉ, best-selling author of Tinker Tailor Soldier Spy

"A unique insight into many hitherto little known dark sides of a profoundly criminal regime. Based on first hand observations and numerous interviews with key players, victims and witnesses, this book is an indictment of those complicit in ensuring President Kagame’s impunity during the last quarter century."—FILIP REYNTJENS, author of Political Governance in Post-Genocide Rwanda (Cambridge University Press).

"The author paints a frightening picture of Rwanda as a police state that reminds one of hallmarks of the Stalinist  era, where opponents to the regime are not disappeared because they are guilty but whose disappearance is sufficient proof of their culpability.  Refreshingly free of jargon, the book breaks important new ground in the literature on Rwanda,  in a lively and suspenseful prose.  This is revisionist history at its best. I cannot recommend it too highly."—RENÉ LAMARCHAND, Emeritus Professor, University of Florida

"Michela Wrong takes her readers on an absorbing political journey, in which Rwandan comrades-in-arms Paul Kagame and Patrick Karegeya steadily mutate into lethal adversaries upon achieving power. The ghosts of other historic mortal fallouts – Stalin and Trotsky, Sankara and Compaore, Robespierre and Danton, Mugabe and Mujuru – haunt this story, but more importantly, it draws our attention to the significant structural problems created by ex-military leaders’ participation in the building of post-war democracy and peace."  —MILES TENDI, author of The Army and Politics in Zimbabwe: Mujuru, the Liberation Fighter and Kingmaker

“Journalist Wrong (It’s Our Turn to Eat) delivers a distressing and deeply reported exposé of Rwandan president Paul Kagame and his control over an increasingly authoritarian state…This expert takedown packs a punch.”—Publishers Weekly

“In Wrong’s panoramic cast of characters, the voices of those whose lives were destroyed ring out the loudest…Gripping, stylish journalism that proves the modern history of Rwanda is hardly settled.”—Kirkus Reviews

“Wrong’s book is an eloquent and entirely convincing plea for that same glaze not to come over the world’s eyes when uncomfortable truths are told.”—The Los Angeles Review of Books

“Michela Wrong lays out the context of her story with great care…The story is compelling.”—Democracy in Africa

“Do Not Disturb is part murder mystery and part sweeping history of an extended family tragedy spread over two countries, three wars, four decades and a genocide. Along the way, Wrong asks hard questions about the true nature of Kagame’s rule and the claims made for Rwanda’s rebirth.”—The Observer

"Do Not Disturb is a remarkable catalog of lies the R.P.F. sold to western apologists and the realities they covered up."—Current Affairs

“A brave and tremendous book... she has produced a classic.”—The Spectator UK

“It is… a remarkable study in the exercise of power by a small elite, and systematic mendacity in politics – which also resonates with our current moment.”—David Edgerton, The Guardian