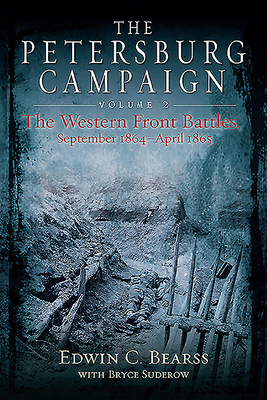 The wide-ranging and largely ignored operations around Petersburg, Virginia, were the longest and most extensive of the entire Civil War. The fighting began in June of 1864, when advance elements from the Union Army of the Potomac crossed the James River and botched a series of attacks against a thinly defended city. The fighting ended nine long months later in the first days of April of 1865. In Volume I of The Petersburg Campaign, legendary historian Edwin C. Bearss detailed the first six major engagements on the "Eastern Front," from the initial attack on the city on June 9 through the Second Battle of Ream's Station on August 25, 1864. In Volume II, Bearss turns his attention and pen to the final half-dozen large-scale combats in The Petersburg Campaign: The Western Front Battles, September 1864 - April 1865.

Although commonly referred to as the "Siege of Petersburg," the city (as well as the Confederate capital at Richmond) was never fully isolated and the combat involved much more than static trench warfare. In fact, much of the wide-ranging fighting involved massive multi-corps Union offensives designed to cut important roads and rail lines feeding Petersburg and Richmond. This second installment includes these major battles:

Accompanying these salient chapters are two dozen original maps by Civil War cartographer George Skoch, coupled with photos and illustrations. Taken together, these two volumes present the most comprehensive and thorough understanding of the major military episodes comprising the fascinating 'Petersburg Campaign'.