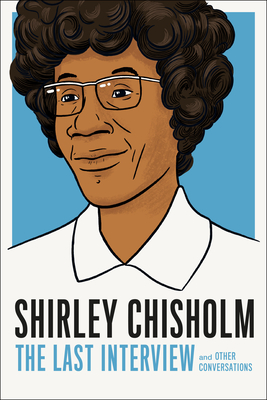 By Shirely Chisholm, Barbara Lee (Introduction by)
$16.99
On Our Shelves Now

“All I can say is that I’m a shaker-upper. That’s exactly what I am.” —Shirley Chisholm

When Shirley Chisholm announced her candidacy for the democratic presidential nomination in 1972, she became the first Black candidate for a major party's nomination—just four years after she had become the first ever Black woman in Congress. In this collection of interviews stretching from her first major profile to her final interview, this icon of iron will and unshakeable political principle reveals how her disciplined and demanding childhood and the expectations placed on her by the public shaped her into a force of nature and the ultimate people’s politician—tirelessly advocating in the halls of government for the poorest and most disadvantaged of the nation.

Shirley Chisholm was born to Caribbean immigrants in Brooklyn, New York. She ran for Congress in the newly drawn 12th District of New York in 1968 and became the first ever black woman to serve in Congress after an upset, grassroots-powered victory. She went on to run for president in 1972. While in Congress, she was instrumental in creating the national school lunch program, expanding the food stamp program, and establishing the Special Supplemental Nutrition Program for Women, Infants and Children.

“I stand as so many of us do on [Shirley Chisholm’s] shoulders.”  —Sen. Kamala Harris