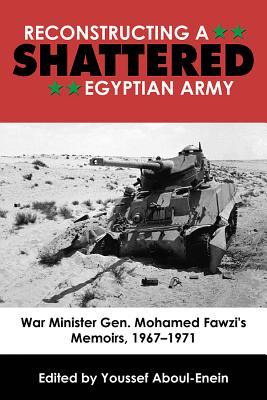 Central to CDR Youssef Aboul-Enein's career has been the mission to introduce America's military leaders to Arabic works of military significance. Just like American military leaders who had an obsession for all things Russian during the Cold War in order to understand the Soviets, the war on al-Qaida and the complex nuances of the Arab Spring demand a deeper comprehension of the Middle East from direct sources. The memoirs of General Mohamed Fawzi, Egyptian War Minister from 1967 to 1971, were first published in 1984, but his work has not ben translated and remains undiscovered by English speaking readers. Many in the United States Armed Services have yet to be introduced to his ideas, perspectives, and the seeds by which the 1973 Yom-Kippur War were laid. In this new contribution to his series of essays written for Infantry Journal, Aboul-Enein has determined to bring to life the military thoughts of this Arab War Minister. This book is a joint Infantry-Naval Institute Press project that has condensed the entire collection of essays on Fawzi to a single volume, to provide future generations of America's military leaders with access his ideas. Fawzi is unique among Arab generals for his scathing critique of his own armed forces, and from his critical examination of what went wrong in 1967, he was able to slowly resurrect the Egyptian Armed Forces to a level that enabled Sadat to consider an offensive in 1973. This Egyptian general will provide insights into the level of Soviet cooperation and military aid provided Egypt after the 1967 Six-Day War, known simply in Arabic by one word, al-Naksah (the setback), not to be confused with the 1948 Arab-Israeli War known by one word, al-Nakbah (the catastrophe). While Fawzi lapses into conspiracy, indulges in wishful thinking, and employs the language of pan-Arabism on occasion, much like Soviet military theorists couched their ideas in Marxist-Leninist rhetoric, this will not stop serious American students of war from recognizing his brilliance about the lessons learned from the crushing defeat of Egyptian arms in the 1967 Six-Day War.