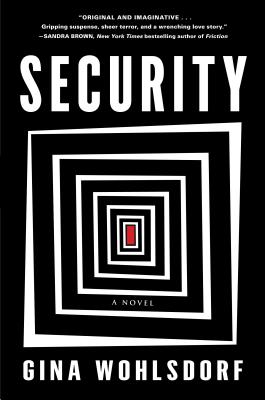 By Gina Wohlsdorf
Email or call for price
Out of Print - This Title is Unlikely to be Available.

The terrible truth about Manderley is that someone is always watching.

Manderley Resort is a gleaming, new twenty-story hotel on the California coast. It’s about to open its doors, and the world--at least those with the means to afford it--will be welcomed into a palace of opulence and unparalleled security. But someone is determined that Manderley will never open. The staff has no idea that their every move is being watched, and over the next twelve hours they will be killed off, one by one.

Writing in the tradition of Edgar Allan Poe and Stephen King, and with a deep bow to Daphne du Maurier, author Gina Wohlsdorf pairs narrative ingenuity and razor-wire prose with quick twists, sharp turns, and gasp-inducing terror. Security is grand guignol storytelling at its very best.

A shocking thriller, a brilliant narrative puzzle, and a multifaceted love story unlike any other, Security marks the debut of a fearless and gifted writer.

“Be surprised, be very surprised: Gina Wohlsdorf brings more than just plot twists and a terrifically tender love story to this thriller . . . It’s her playful homage to Hitchcock and du Maurier that had me reading, howling, and just plain loving this novel.” —Sara Gruen, author of At the Water’s Edge

“The thrill of this novel goes beyond its wickedly clever,  split-screen, high-tech wizardry—a kind of video gamer’s literary retake of Hitchcock’s Rear Window--and emanates  from its strange, disembodied narrator . . . The effect is terrifying, sexy, dizzying, and impossible to look away from.” —Tim Johnston, author of Descent

“Shocking and filled with Tarantino-ish dark humor. . . Structurally reminiscent of the amazing Jennifer Egan,Wohlsdorf’s book is certainly a hybrid, like nothing else. Get ready.” —Ann Beattie, author of The State We’re In

“Flawless . . . Security is perfectly tuned for blockbuster status . . . They don’t make a hotel big enough to house all the people who will want to read this, and soon, as in Manderley, all eyes will be on Wohlsdorf.” —Daniel Kraus, Booklist, starred review

Gina Wohlsdorf’s first novel, Security, was chosen as an Amazon Best Book of 2016. She lives in Colorado.

“This is a chilling tale that pays unabashed homage to such horror masters as Stephen King, Daphne du Maurier and Edgar Allan Poe. It's an intense and unforgettable debut novel by a Bismarck, N.D., native whose media photo reflects the sweet face of the girl next door, but whose blood-dripping prose will have horror fans sopping up every word.” —Minneapolis Star Tribune

“A fast-paced, highly evolved thriller that clearly marks Wohlsdorf as a force to be reckoned with.” –New York Journal of Books

“(A) stellar debut… As the Ducati-swift plot accelerates…it’s a testament to Wohlsdorf’s skill that she successfully negotiates the numerous tonal shifts between the unfolding Grand Guignol splatterfest and Tessa and Brian’s rekindling passion. Readers will gradually discover an even more emotionally affecting story as the action races to the moving climax.”
—Publishers Weekly, starred review

“…a flawless literary refresh of giallo devices, completed with a masked-and-gloved killer; long, sharp knives; screaming, lingerie-clad victims; and twists aplenty – oh, get ready for the twists. Security is perfectly tuned for blockbuster status: scary, gory, kinky, and experimental enough to push readers’ envelopes without going so far as to lose mainstream appeal. They don’t make a hotel big enough to house all the people who will want to read this, and soon, as in Manderlay, all eyes will be on Wohlsdorf.”
— Booklist, starred review

“This horror story with a humorous edge casts video surveillance as both hero and villain and raises plentiful goose bumps as a result.”
– Kirkus Reviews

"Absolutely stunning. The brilliant writing is from a talented new writer whose words will send one’s heart beating faster than it should....The danger is abundant and will leave readers breathless."
– Manhattan Book Review

“Touching, violent, suspenseful, humorous and literary….Do. Not. Miss. This. One.”
– Bookreporter.com

“Security isn’t your run-of-the mill thriller.  Not by a long shot.  Original and imaginative, the story is told in so clever a manner that it could almost obscure the story itself. . .were it not for Wohldoft’s gasp-inducing plot and fully engaging characters whom she develops without any sacrifice to the gripping suspense, the sheer terror, or the wrenching love story. When reading the last half of the book, I didn’t take a breath. I predict SECURITY will be this year’s THE GIRL ON THE TRAIN.”
— Sandra Brown, author of Friction

"Be surprised, be very surprised: Gina Wohlsdorf brings more than just plot twists and a terrifically tender love story to this thriller about a disastrous opening for a luxury beach-front hotel. It's her playful homage to Hitchcock and du Maurier that had me reading, howling, and just plain loving this novel. I can't wait to read her next!”
— Sara Gruen, author of At the Water’s Edge