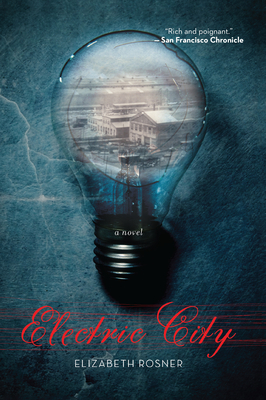 Upstate New York, at the confluence of the great Hudson River and its mighty tributary the Mohawk —from this stunning landscape came the creation of a new world of science. In 1887, Thomas Edison moved his Edison Machine Works here and in 1892, it became the headquarters of a major manufacturing company, giving the town its nickname: Electric City.

The peak of Autumn, 1919: The pull of scientific discovery brings Charles Proteus Steimetz, a brilliant mathematician and recent arrival from Ellis Island, to town. His ability to capture lightning in a bottle earns him the title "Wizard of Electric City." Barely four feet tall with a deeply curving spine, Steinmetz's physical deformity belies his great intellect. Allied with his Mohawk friend Joseph Longboat and his adopted eleven–year–old granddaughter Midget, the advancements he makes in Electric City will, quite simply, change the world.

The peak of Autumn, 1965: Sophie Levine, the daughter of a company man, one of the many scientists working at The Company, whose electric logo can be seen from everywhere in town. Her family escaped Europe just before World War II, leaving behind a wake of annihilation and persecution. Ensconced in Electric City, Sophie is coming of age just as the town is gasping its last breaths. The town, and America as a whole, is on the cusp of great instability: blackouts, social unrest over Vietnam, and soon the advent of the seventies. Into her orbit drifts Henry Van Curler, the favored son of one of Electric City's founding Dutch families, as well as Martin Longboat, grandson of Joseph Longboat. This new generation of Electric City will face both the history of their town and their own uncertain future, struggling to bridge the gap between the old world and the new.

Electric City is a vital, pulsing, epic novel of America, of its great scientific ingenuity and its emotional ambition; one that frames the birth and evolution of its towns against the struggles of its indigenous tribes, the immigrant experience, a country divided, and the technological advancements that ushered in the modern world.

Elizabeth Rosner is the author of three novels and a poetry collection. The Speed of Light was translated into nine languages and won several awards in the US and in Europe, including being shortlisted for the prestigious Prix Femina. Blue Nude was named among the best books of 2006 by the San Francisco Chronicle. Electric City was named among the best books of 2014 by NPR. Her essays and reviews have appeared in the New York Times Magazine, Elle, the San Francisco Chronicle and others. She lives in Berkeley, CA.

"With deft descriptions, Rosner sketches the bustling city, on land long cherished by aboriginal culture, which grew and flourished as whites invaded and industrialized...offers a gentle meditation on love and loss."—Kirkus

"There is also a great affection in this novel, for a place at once as old as lightning and as young as the latest invention. All the characters in this book—and, I suppose, this reviewer—are just molecules passing through the Electric City." — The Historical Novel Society

"Rosner beautifully bridges past and present in the dynamism of her historical depictions, capturing the dangers and excitement of invention, the complex play between generations of America's immigrant populations and its native peoples, the wonder of young love, and the insatiable spark of curiosity that is a calling card of scientific inquiry, and a hallmark of the human heart." —Elle

"This beautiful book joins the compression, vivid intensity, and imaginative connectivity of poetry to the deep character work of the novel. Rosner handles with effortless assurance both the small, intimate stories and the great impersonal worlds of science, nature, and history that combine to make us who we are." — Karen Joy Fowler, We Are All Completely Beside Ourselves, Winner of the 2014 PEN/Faulkner Award

"It's a wondrous thing to watch the deepening and unfurling of a writer's talent over one book and another and another. Electric City is Elizabeth Rosner at her best yet, a book that leaves the reader hungering for her next." —Chicago Tribune

"A heady mix of world–changing history (Thomas Edison and Charles Steinmetz) coupled against a bewitching love triangle ignites Rosner's gorgeously written exploration of the way inventions transform cities, hearts, and lives, sometimes with a terrible cost, and the way light nudges inroads in the darkness. Electrifyingly original." —Caroline Leavitt, New York Times bestselling author of Is This Tomorrow and Pictures of You

"Reminiscent of In the Skin of a Lion and set in a 1960s New York manufacturing town once founded by Thomas Edison, Electric City is a love story made incandescent by Rosner's prose. The triangle she creates between Sophie Levine and her two admirers is as tangled, tragic, and beautiful as the history of their fundamentally American city." —Maria Hummel, author of Motherland

"Rich and poignant…The provenance of each character is thematically and dramatically significant…and the novel beautifully explores the ways we attach ourselves to a place, the ways we might escape it, and how these things, like the Hudson River, often flow both ways." —San Francisco Chronicle

"Electric City is the gripping narrative of an ever–changing America seen through the prism of one town caught between the past and the future, and the tangled tragic love triangle set within it. Compelling, beautiful, important, and timeless, Electric City is as much a thoughtful look at our changing past as it is a metaphor for the present. Elizabeth Rosner is a bright literary light." —Jennifer Gilmore, author of The Mothers

"Rosner's richly imagined historical novel richly conveys an abiding sense of time and place. A deeply evocative paean to the wonders of science, the perils of technology, and the sacrifices of people in thrall to their power." — Booklist

"Rosner's lyrical new novel chronicles the rise and fall of this company town, following several generations of immigrants and the Native American people who watched them come...Through layers of time 'sticky like amber,' Rosner etches images of family, community and the electric power of love." — Jane Ciabattari, BBC