The Holy Earth: The Birth of a New Land Ethic (Paperback) 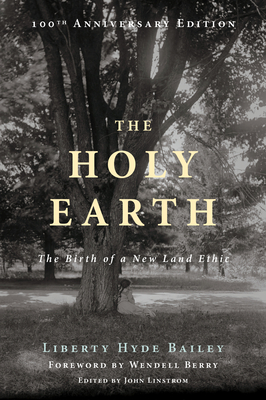 The agrarian tradition runs as an undercurrent through the entire history of literature, carrying the age–old wisdom that the necessary access of independent farmers to their own land both requires the responsibility of good stewardship and provides the foundation for a thriving civilization. At the turn of the last century, when farming first began to face the most rapid and extensive series of changes that industrialization would bring, the most compelling and humane voice representing the agrarian tradition came from the botanist, farmer, philosopher, and public intellectual Liberty Hyde Bailey. In 1915, Bailey's environmental manifesto, The Holy Earth, addressed the industrialization of society by utilizing the full range of human vocabulary to assert that the earth's processes and products, because they form the governing conditions of human life, should therefore be understood not first as economic, but as divine. To grasp the extent of human responsibility for the earth, Bailey called for "a new hold" that society must take to develop a "morals of land management," which would later inspire Aldo Leopold's "land ethic" and several generations of agrarian voices. This message of responsible land stewardship has never been as timely as now.

Born on a humble frontier farm in southwest Michigan, Liberty Hyde Bailey (1858–1954) went on to become the "Father of Modern Horticulture," a leading public intellectual on the question of rural communities, and a national spokesperson for agricultural policy. His birthplace and childhood home functions as a museum and educational outreach center devoted to telling Bailey's story and engaging the modern world with his philosophy and ideals.

John Linstrom is a writer, doctoral student, and teacher. He writes and publishes poetry and nonfiction prose, and has recently begun work on a PhD. He is the editor of The Holy Earth