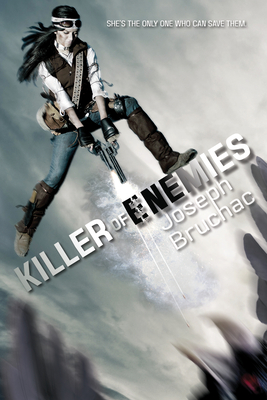 A post-Apocalyptic YA novel with a steampunk twist, based on an Apache legend.

Years ago, seventeen-year-old Apache hunter Lozen and her family lived in a world of haves and have-nots. There were the Ones-people so augmented with technology and genetic enhancements that they were barely human-and there was everyone else who served them.

Then the Cloud came, and everything changed. Tech stopped working. The world plunged back into a new steam age. The Ones' pets-genetically engineered monsters-turned on them and are now loose on the world.

Fate has given Lozen a unique set of survival skills and magical abilities that she uses to take down monsters for the Ones who have kidnapped her family. But with every monster she takes down, Lozen's powers grow, and she connects those powers to an ancient legend of her people. It soon becomes clear to Lozen that she is not just a hired gun.

Joseph Bruchac is among the most respected and widely published Native American authors, with over 100 titles in print, including the popular Keepers of the Earth series and Lee & Low's Killer of Enemies trilogy, which received a starred review from Kirkus Reviews. A Rockefeller Fellow and an NEA Poetry Writing Fellow, Bruchac has received numerous recognitions over his long-standing career; including the Native Writers' Circle of the Americas Lifetime Achievement Award. In addition to writing, Bruchac is an editor at Greenfield Review Press, a literary publishing house he co-founded with his wife. He lives in Greenfield Center, New York. To find out more about Joseph Bruchac, visit josephbruchac.com.