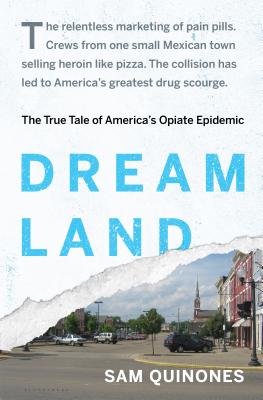 By Sam Quinones
Email or call for price
Out of Print - This Title is Unlikely to be Available.

Winner of the NBCC Award for General Nonfiction

From a small town in Mexico to the boardrooms of Big Pharma to main streets nationwide, an explosive and shocking account of addiction in the heartland of America.

In 1929, in the blue-collar city of Portsmouth, Ohio, a company built a swimming pool the size of a football field; named Dreamland, it became the vital center of the community. Now, addiction has devastated Portsmouth, as it has hundreds of small rural towns and suburbs across America--addiction like no other the country has ever faced. How that happened is the riveting story of Dreamland.

With a great reporter’s narrative skill and the storytelling ability of a novelist, acclaimed journalist Sam Quinones weaves together two classic tales of capitalism run amok whose unintentional collision has been catastrophic. The unfettered prescribing of pain medications during the 1990s reached its peak in Purdue Pharma’s campaign to market OxyContin, its new, expensive--extremely addictive--miracle painkiller. Meanwhile, a massive influx of black tar heroin--cheap, potent, and originating from one small county on Mexico’s west coast, independent of any drug cartel--assaulted small town and mid-sized cities across the country, driven by a brilliant, almost unbeatable marketing and distribution system. Together these phenomena continue to lay waste to communities from Tennessee to Oregon, Indiana to New Mexico.

Introducing a memorable cast of characters--pharma pioneers, young Mexican entrepreneurs, narcotics investigators, survivors, and parents--Quinones shows how these tales fit together. Dreamland is a revelatory account of the corrosive threat facing America and its heartland.

Sam Quinones is a journalist, author and storyteller whose two acclaimed books of narrative nonfiction about Mexico and Mexican immigration made him, according to the SF Chronicle Book Review, "the most original writer on Mexico and the border."

"Does what ‘Fast Food Nation’ did for fast food to Black Tar Heroin and oxycodone . . . A stunning journalistic journey that follows the history and narrative trajectories that lead to this entirely new style of cultivating drug addiction . . . I just love this book." - Marc Maron

“The most original writer on Mexico and the border out there.” —San Francisco Chronicle Book Review

“Over the last 15 years, he has filed the best dispatches about Mexican migration and its effects on the United States and Mexico, bar none.” —Los Angeles Times Book Review

“Journalist Quinones weaves an extraordinary story, including the personal journeys of the addicted, the drug traffickers, law enforcement, and scores of families affected by the scourge, as he details the social, economic, and political forces that eventually destroyed communities in the American heartland and continues to have a resounding impact.” —starred review, Booklist

“Quinones' research ensures that there is something legitimately interesting (and frequently horrifying) on every page. A-.” —Entertainment Weekly

“In Dreamland, former Los Angeles Times reporter Sam Quinones deftly recounts how a flood of prescription pain meds, along with black tar heroin from Nayarit, Mexico, transformed the once-vital blue-collar city of Portsmouth, Ohio, and other American communities into heartlands of addiction. With prose direct yet empathic, he interweaves the stories of Mexican entrepreneurs, narcotics agents, and small-town folks whose lives were upended by the deluge of drugs, leaving them shaking their heads, wondering how they could possibly have resisted.” —Mother Jones

“Smack is back in the news as heroin use spikes and busts pile up at the border, making Dreamland a timely book. Veteran journalist and storyteller Sam Quinones provides investigative reporting to explain the latest surge. But he also goes way deeper; he tells the social and human stories at the heart of the opiate trade and how it tortures the souls of America and Mexico.” —Ioan Grillo, author of EL NARCO

“Dreamland spreads out like a transnational episode of The Wire, alternately maddening, thrilling, depressing, and with writing as sharp and insightful as a razor blade. You cannot understand our drug war and Mexican immigration to the United States without reading this book.” —Gustavo Arellano, syndicated columnist ¡Ask a Mexican!

“Quinones is a veteran journalist and expert storyteller long steeped in the demi-monde of Mexican-American bordercrossings. Dreamland: The True Tale of America's Opiate Epidemic is an intricate jigsaw puzzle piecing together his findings from intensive investigation of the unprecedented spread of heroin addiction throughout the United States over the past two decades . . . Dreamland offers an eye-opening, enlightening and mesmerizing account of one of the most important stories of the last few decades . . . Quinones is a master storyteller, with a knack of bringing hundreds of characters to life . . . Dreamland stands as a model of meticulous investigative reporting providing important insights not only the current opiate epidemic but also into the sometimes negative symbiosis between our country and our neighbors to the south.” —New York Journal of Books

"Quinones recounts individual tales--from junkies in Portland, Ore., to pill mills in Appalachia to entrepreneurial heroin traffickers from small-town Mexico--to describe a “catastrophic synergy” in which over-prescription of opioid painkillers begets addicts, many of whom then turn to heroin, which is cheaper and just as ubiquitous." —Best Books of 2015, Boston Globe

"The path of heroin from America’s urban slums to its trim suburban subdivisions is traced by a Los Angeles Times reporter. Quinones’ deeply researched and readable book says well-heeled addicts got hooked first on pain-killing medications like OxyContin--but then switched to much cheaper Mexican heroin, feeding a problem across the nation." —Best Books of 2015, St. Louis Dispatch

“Fascinating . . . a harrowing, eye-opening look at two sides of the same coin, the legal and illegal faces of addictive painkillers and their insidious power.” —Publishers Weekly

“A haunting tale of opiate abuse in the heartland . . . Using expert storytelling and exhaustive detail, Quinones chronicles the perfect storm of circumstances that cleared the way for the Mexican narcotic to infiltrate our small and midsize communities over the last two decades.” —Kansas City Star

"You won’t find this story told better anywhere else, from the economic hollowing-out of the middle class to the greedy and reckless marketing of pharmaceutical opiates to the remarkable entrepreneurial industry of the residents of the obscure Mexican state of Nayarit . . . Dreamland--true crime, sociology, and exposé--illuminates a catastrophe unfolding all around us, right now." —Laura Miller’s 10 Favorite Books of 2015, Slate

"Dreamland is at once a heartbreaking narrative about the individuals in the grips of addiction, and a thorough history of how that addiction was made possible by a variety of key players. Featuring voices from every corner of the crisis, including pharmaceutical bigwigs, young Mexican drug runners, police, doctors, addicts, survivors, and families touched by epidemic, Dreamland is a must-read for anyone grappling with the story of heroin addiction in the United States." - Bustle

“The must-read book about America's heroin crisis . . . Quinones combines thorough research with superlative narrative skills to produce a horrifying but compulsively readable book about opiate addiction . . . a book that every American should read. And I state that without reservation . . . This book is as much of a page-turner as a good mystery, as well as being thoroughly and disturbingly illuminating about a national crisis.” —Christian Science Monitor

“A gripping read and hard-hitting account of a ubiquitous plague that has flown under the radar.” —Portland Business Journal

"Every so often I read a work of narrative nonfiction that makes me want to get up and preach: Read this true story! Such is Sam Quinones’ astonishing work of reporting and writing, Dreamland: the True Tale of America’s Opiate Epidemic." —Seattle Times

“Everybody should read this book. Everybody.” —Rod Dreher, The American Conservative

"[A] powerful investigation into the explosion of heroin abuse in suburban America that combines skillful reporting and strong research with a superb narrative." —The Spectator

Stuff for Mother's Day: shop for pickup at Bookworks.