The Spiritual Meaning of the Sixties: The Magic, Myth, and Music of the Decade That Changed the World (Paperback) 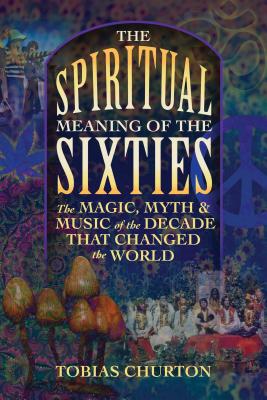 Unveils the spiritual meaning that fueled the artistic, political, and social revolutions of the 1960s

• Investigates the spiritual principles that informed everything from the civil rights and anti-war movements, to the hippies’ rejection of materialist culture, to the rise of feminism, gay rights, and environmentalism

• Offers in-depth analysis of many of the era’s most famous books, films, and music

No decade in modern history has generated more controversy and divisiveness than the tumultuous 1960s. For some, the ‘60s were an era of free love, drugs, and social revolution. For others, the Sixties were an ungodly rejection of all that was good and holy. Embarking on a profound search for the spiritual meaning behind the massive social upheavals of the 1960s, Tobias Churton turns a kaleidoscopic lens on religious and esoteric history, industry, science, philosophy, art, and social revolution to identify the meaning behind all these diverse movements.

Engaging with views of mainstream historians, some of whom write off this pivotal decade as heralding an overall decline in moral values and respect for tradition, Churton examines the intricate network of spiritual forces at play in the era. He reveals spiritual principles that united the free love movement, the civil rights and anti-war movements, the hippies’ rejection of materialist culture, and the eventual rise of feminism, gay rights, and environmentalism. He traces influences from medieval troubadours, Gnosticism, Hindu philosophy, Renaissance hermetic magic, and the occult doctrines of Aleister Crowley. He also examines the psychedelic revolution, the genesis of popular interest in UFOs, and the psychological consequences of the Bomb and the assassinations of the Kennedys and Martin Luther King. In addition, Churton investigates the huge shifts in consciousness reflected in the movies, music, art, and literature of the era--from Frank Sinatra to the Beatles, from I Love Lucy to Star Trek, from John Wayne to Midnight Cowboy--much of which still resonates with the youth of today.

Taking the reader on a long strange trip from crew-cuts and Bermuda shorts to Hair and Woodstock, from liquor to psychedelics, from uncool to cool, and from matter to Soul, Churton shows how the spiritual values of the Sixties are now reemerging, with an astonishing influx of spiritual light, to once again awaken us.

Tobias Churton is Britain’s leading scholar of Western Esotericism, a world authority on Gnosticism, Hermeticism, and Rosicrucianism. He is a filmmaker and the founding editor of the magazine Freemasonry Today. An Honorary Fellow of Exeter University, where he is faculty lecturer in Rosicrucianism and Freemasonry, he holds a master’s degree in Theology from Brasenose College, Oxford, and created the award-winning documentary series and accompanying book The Gnostics, as well as several other films on Christian doctrine, mysticism, and magical folklore. The author of many books, including Gnostic Philosophy, The Invisible History of the Rosicrucians, and Aleister Crowley: The Beast in Berlin, he lives in England.

“The Spiritual Meaning of the Sixties is Tobias Churton’s most personal book. . . . A wonderfully capacious interpretation of the tumultuous decade.”
— James Penner, Ph.D., author of Timothy Leary: The Harvard Years

"All in all, Churton has written a fascinating and important book, and it is a must-read for any reader with an interest in the 60's or contemporary culture generally."
— Ray Grasse, Quest Spring 2019