Against the Current: Paddling Upstream on the Tennessee River (Paperback) 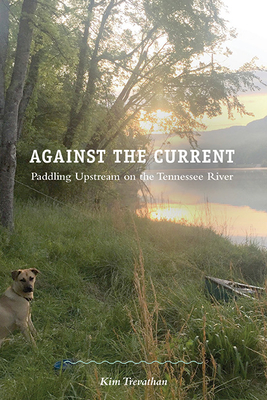 In August 1998 Kim Trevathan summoned his beloved 45-pound German shepherd mix, Jasper, and paddled a canoe down the Tennessee River, an adventure chronicled in Paddling the Tennessee River: A Voyage on Easy Water. Twenty years later, in Against the Current: Paddling Upstream on the Tennessee River, he invites readers on a voyage of light-hearted rumination about time, memory, and change as he paddles the same river in the same boat—but this time going upstream, starting out in early spring instead of late summer. In sparkling prose, Trevathan describes the life of the river before and after the dams, the sometimes daunting condition of its environment, its banks’ host of evolving communities—and also the joys and follies of having a new puppy, 65-pound Maggie, for a shipmate.

Trevathan discusses the Tennessee River’s varied contributions to the cultures that hug its waterway (Kentuckians refer to it as a lake, but Tennesseans call it a river), and the writer’s intimate style proves a perfect lens for the passageway from Kentucky to Tennessee to Alabama and back to Tennessee. In choice observations and chance encounters along the route, Trevathan uncovers meaningful differences among the Tennessee Valley’s people—and not a few differences in himself, now an older, wiser adventurer.

Whether he is struggling to calm his land-loving companion, confronting his body’s newfound aches and pains, craving a hard-to-find cheeseburger, or scouting for a safe place to camp for the night, Trevathan perseveres in his quest to reacquaint himself with the river and to discover new things about it. And, owing to his masterful sense of detail, cadence, and narrative craft, Trevathan keeps the reader at the heart of the journey. The Tennessee River is a remarkable landmark, and this text exhibits its past and present qualities with a perspective only Trevathan can provide.

KIM TREVATHAN is a professor of writing at Maryville College. He is the author of three other books on water voyages, including most recently Liminal Zones: Where Lakes End and Rivers Begin.