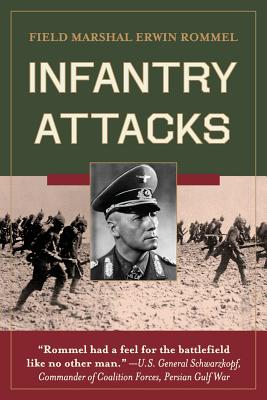 Infantry Attacks is a classic text in the field of military strategy. Written by German Field Marshal Erwin Rommel, it was first published in 1937 as a journal-esque chronicle of the author's experiences in World War I and the lessons he learned there. In it, he provides detailed accounts of a variety of military strategies that rely on speed, deception, and deep penetration into enemy territory to intimidate and surprise opposing forces. Considered by his troops and enemies alike to be a humane, professional and immensely skilled officer, Rommel's use of intimidation and the advantage of surprise often forced enemies to surrender quickly, thereby avoiding unnecessary risk of injury and death for his troops (and their enemies), exertion, and expenditure of ammunition.

Infantry Attacks was widely read by soldiers and military leaders upon its release and has become something of a staple in military education, providing a detailed glimpse into the tactics of an extremely effective and widely respected officer. It has been studied extensively throughout the West, particularly in the United States. The revered General George S. Patton is said to have been heavily influenced by this text.

Rommel was appointed to the rank of high commander by Adolf Hitler in part because of the success of this book. Such positions were ordinarily reserved for members of old military families and the Prussian aristocracy, so this assignment spoke to Rommel's competence and the influence of his writing. Rommel went on to lead Hitler's Afrika Korps in North Africa. Although he planned to release a sequel based on his experiences there, he was unable to complete the manuscript before his death in 1944.