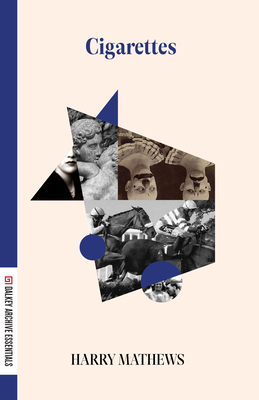 Cigarettes is a novel about the rich and powerful, tracing their complicated relationships from the 1930s to the 1960s, from New York City to Upper New York State. Though nothing is as simple as it might appear to be, we could describe this as a story about Allen, who is married to Maud but having an affair with Elizabeth, who lives with Maud. Or say it is a story about fraud in the art world, horse racing, and sexual intrigues. Or, as one critic did, compare it to a Jane Austen creation, or to an Aldous Huxley novel--and be right and wrong on both counts.

What one can emphatically say is that Cigarettes is a brilliant display of Harry Mathews's ingenuity and deadly playfulness.

Born in New York in 1930, Harry Mathews settled in Europe in 1952 and has since then lived in Spain, Germany, Italy, and (chiefly) France. When Mathews published his first poems in 1956, he was associated with the so-called New York School of poets, with three of whom (John Ashbery, Kenneth Koch, and James Schuyler) he founded the review Locus Solus in 1961. Through his friendship with Georges Perec, he became a member of the Oulipo in 1972.