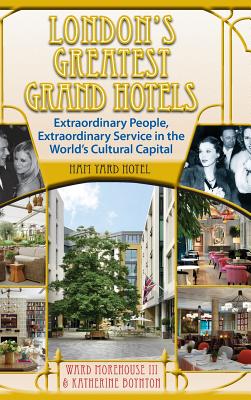 The long-awaited sequel to London's Grand Hotels arrives in four stunning volumes that capture the glamour and excitement of England and the legendary hotel guests of a world gone by. Journey to where Winston Churchill learned he had been named Prime Minister, and discover where Queen Elizabeth II, The Prince of Wales, Vivien Leigh, Laurence Olivier, Humphrey Bogart, and Lauren Bacall once resided during their wondrous fairy tale lives.

Ham Yard Hotel draws you along a distinguished journey to a cutting-edge urban village-style sensation designed by co-owner Kit Kemp, where color, vibrancy, sophistication, and style blend into a breathtaking contemporary yet earthy realm.

About the author: Ward Morehouse III is widely recognized as one of the country's premiere authorities on grand hotels. His other works include Inside the Plaza, The Bear Who Lived at the at The Plaza, The Waldorf Astoria: America's Gilded Dream, If It Was Easy, The Actors, and his newest play, Hound Dog. Morehouse was a staff correspondent of the Christian Science Monitor, a Broadway columnist for Reuters, the New York Post, the New York Sun, and Travel Smart, among many others. He is the host of Broadway After Dark-TV.

Katherine Boynton is a professional actress, writer, producer, educator, and director of the film, Diversity is Beautiful. Boynton is Executive Producer of Broadway After Dark-TV. She co-wrote the screenplay, Waters of Summer and wrote a children's book that will be published this year. She is Co-Founder and President of the film and global media company, Thousand Islands Productions, Inc.

." . . life, history, poetic beauty and theatrical drama . . . a book to savor and taste the joys of London and its hotels." -Bill Diehl Entertainment Correspondent of ABC News Radio

." . . Morehouse puts his stamp on the hotels in London as he has done in New York, famously along with the genius artistic impressions of his partner and wife, Katherine Boynton. If Thomas Cook were alive today he would take Boynton's and Morehouse's tour " - Joey Reynolds, legendary Radio, TV, and Internet talk show host.

"Whether you're planning the vacation of a lifetime, or living vicariously, there are no better guides to London's Greatest Grand Hotels than Ward Morehouse III and Katherine Boynton. The couple delve into the history of the hotels and their prominent guests--a virtual who's who of the cr me de la cr me--and also of the buildings. They describe the architecture, d cor, statuary, murals, and public rooms. You'll learn where Winston Churchill was when he learned he'd been named prime minister, where Oscar Wilde was a regular and let's not ignore the royals: Princess Elizabeth, now Queen Elizabeth II, The Prince of Wales who became Edward VII, and theater royalty including a delightful vignette about Vivien Leigh and Laurence Olivier. "In reporting on the Savoy Morehouse and Boynton tell readers for whom the great chef Escoffier created dishes: Nellie Melba, Luisa Tetrazzini and Lily Langtry. The last entry is the Queen Mary 2, Why? Because it's a posh floating hotel."