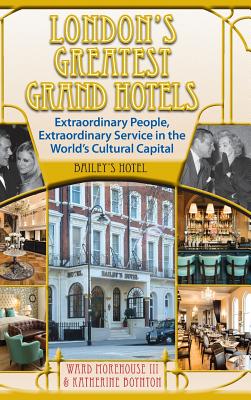 "Whether you're planning the vacation of a lifetime, or living vicariously, there are no better
guides to London's Greatest Grand Hotels than Ward Morehouse III and Katherine Boynton.
The couple delve into the history of the hotels and their prominent guests--a virtual who's who of the cr me de la cr me--and also of the buildings. They describe the architecture, d cor, statuary, murals, and public rooms. You'll learn where Winston Churchill was when he learned he'd been named prime minister, where Oscar Wilde was a regular and let's not ignore the royals: Princess Elizabeth, now Queen Elizabeth II, The Prince of
Wales who became Edward VII, and theater royalty including a delightful vignette about
Vivien Leigh and Laurence Olivier.

"In reporting on the Savoy Morehouse and Boynton tell readers for whom the great chef
Escoffier created dishes: Nellie Melba, Luisa Tetrazzini and Lily Langtry. The last entry is
the Queen Mary 2, Why? Because it's a posh floating hotel."