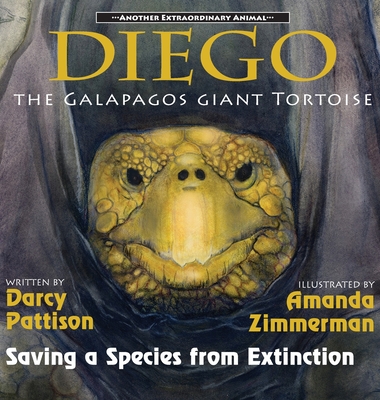 "A worthwhile addition to Pattison's Another Extraordinary Animal series." Booklist

Can humans save a species from extinction? Yes With patience, persistence, and a full dose of hope.

This is the heartbreaking tale of a Gal pagos giant tortoise species that was almost extinct, the herculean task of conservation work by scientists and volunteers, and a heartwarming tale of hope for our planet.

In 1959, Ecuador established a national park to protect the Gal pagos Islands. When they did a census, scientists found only 14 individual Espa ola Island tortoises. The species was almost extinct.

Then, they found one more Espa ola tortoise-in the San Diego Zoo

They named him Diego and brought him back to the Gal pagos for a breeding program.

Ecuador established one of the most successful breeding programs in scientific history. For sixty years, scientists and hundreds of volunteers have fought valiantly to save this amazing giant tortoise species. Would it be enough? Would they be able to save the species? Read the amazing story of Diego, the giant Gal pagos tortoise.

This is the fifth book in a picture book series, Another Extraordinary Animal, which includes a bird, mammal, spider, amphibian, and reptile. Back matter for this book contains information about Diego, his species, the Gal pagos Islands, and more.