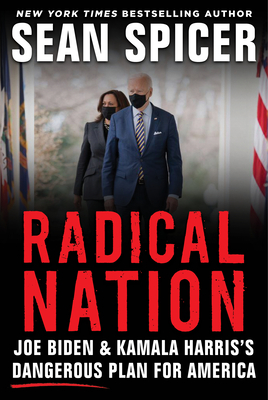 RADICAL NATION makes it clear what is at stake. If you want to Save America you must read this--it is MAGA all the way." -- PRESIDENT DONALD J. TRUMP "RADICAL NATION is a must-read. Spicer presents a clear and concise understating of the direction we are headed and provides the tools and tactics necessary to combat it." -- NEWT GINGRICH "The Biden-Harris regime is pushing discredited policies that will destroy the very fabric of America. RADICAL NATION provides us with background on the direction they could take us, and ways we can fight back and win." -- DAN BONGINO "RADICAL NATION is critically important. My friend Sean perfectly diagnoses the problems with the Biden presidency and what we can do to save our nation." -- CHARLIE KIRK

RADICAL NATION is a bold grassroots agenda for defending America against the Progressives' Socialist agenda. Featuring powerful stories that will move you and keep you riveted, this book will channel conservatives discouragement, anger, and betrayal into meaningful action to keep America free, strong, and secure for our children and grandchildren.

SEAN SPICER has served as White House press secretary and communications director as well as Republican National Committee communications director and chief strategist. Earlier, he worked for the United States Trade Representative and for several members of Congress. A frequent public speaker and commentator, Spicer is the author of the New York Times bestselling book The Briefing: Politics, The Press, and The President and Leading America: President Trump's Commitment to People, Patriotism, and Capitalism. Spicer can be seen weeknights on NewsmaxTV hosting Spicer & Co., one of the fastest-growing shows on television today. He also is a partner in Point1, an advertising and marketing political firm specializing in direct mail and digital campaigns. Spicer is a graduate of the United States Naval War College. He lives and works in the Washington, D.C. area. Additional information is available on SeanSpicer.com