Shadow Network: Media, Money, and the Secret Hub of the Radical Right (Hardcover) 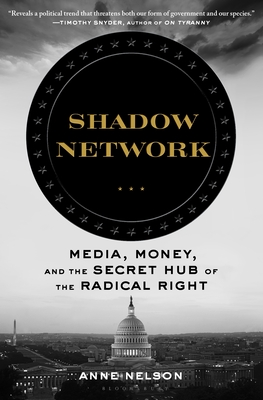 Shadow Network: Media, Money, and the Secret Hub of the Radical Right (Hardcover)

“Reveals a political trend that threatens both our form of government and our species.” - Timothy Snyder, author of ON TYRANNY

"Riveting.... Want to understand how so many Americans turned against truth? Read this book." Nancy Maclean, author of DEMOCRACY IN CHAINS

In 1981, emboldened by Ronald Reagan's election, a group of some fifty Republican operatives, evangelicals, oil barons, and gun lobbyists met in a Washington suburb to coordinate their attack on civil liberties and the social safety net. These men and women called their coalition the Council for National Policy. Over four decades, this elite club has become a strategic nerve center for channeling money and mobilizing votes behind the scenes. Its secretive membership rolls represent a high-powered roster of fundamentalists, oligarchs, and their allies, from Oliver North, Ed Meese, and Tim LaHaye in the Council's early days to Kellyanne Conway, Ralph Reed, Tony Perkins, and the DeVos and Mercer families today.

In Shadow Network, award-winning author and media analyst Anne Nelson chronicles this astonishing history and illuminates the coalition's key figures and their tactics. She traces how the collapse of American local journalism laid the foundation for the Council for National Policy's information war and listens in on the hardline broadcasting its members control. And she reveals how the group has collaborated with the Koch brothers to outfit Radical Right organizations with state-of-the-art apps and a shared pool of captured voter data - outmaneuvering the Democratic Party in a digital arms race whose result has yet to be decided.

In a time of stark and growing threats to our most valued institutions and democratic freedoms, Shadow Network is essential reading.

Anne Nelson has received a Livingston Award for her journalism, a Guggenheim Fellowship for her historical research, and a Bellagio Fellowship for her research on the social impact of digital media. A graduate of Yale University, she began her career as a journalist in the U.S and abroad. She won an Associated Church Press Award for her writing on the conflict in Central America, which she covered for the Los Angeles Times, NPR, and the BBC. She has taught at Columbia University for over two decades, first at the School of Journalism and then at the School of International and Public Affairs. Her previous books include Red Orchestra: The Berlin Underground and the Circle of Friends Who Resisted Hitler, a New York Times Book Review Editors' Choice; and Suzanne's Children: A Daring Rescue in Nazi Paris, a finalist for the National Jewish Book Award. A native of Oklahoma, she lives in New York City.

"Fascinating . . . You can't convert anxiety into votes without cash, and Nelson does an excellent job following the money . . . Shadow Network is bound to appeal to those whose interest in politics run deep, but it's not so inside baseball that lay readers will be stuck in the weeds. . . . Readers curious about how the American right gets its message out will find much to admire in it." - NPR.org

"If you like being scared, read Anne Nelson’s Shadow Network. It’s the alarming story of how Christian fundamentalists coalesced into a political force and have essentially taken over the Trump administration. . . . The task of putting this whole story together is nothing shy of monumental." - San Francisco Review of Books

"Throughout Shadow Network, Nelson paints an utterly damning portrait of the rise of the modern right, of ostensibly Christian political activists partnering with fabulously wealthy industrialists to effectively take over the country. She identifies the owners, purveyors, and funders of right-wing media, and delves into the political donations of right-wing millionaires and billionaires, which have been enormously effective at lowering taxes and eliminating regulations." - The New Republic

"An explosive, comprehensive account of the 30-year relationship between the conservative Council for National Policy, which promotes a stringent political ideology based on Southern Baptist morals, and the Republican Party . . . Nelson meticulously and chronologically traces the connections between the CNP and a host of Republican leaders and organizations. This is an absolutely momentous piece of investigative journalism." - Publishers Weekly, starred review

"Fascinating . . . Nelson deftly and persuasively follows the money, tracing how it has flowed into government, political campaigns, and organizations to support the Christian fundamentalist agenda, concerned less with the economy than with social issues such as opposition to abortion and rights for LGBT people, and fomenting cultural divisions." - National Book Review

"There is, finally, a growing awareness of how effectively the right has organized to seize control of American politics—an awareness Shadow Network will help spread." - Boston Review

"Nelson’s meticulous portrait of the CNP arrives at an important moment. She reminds us that the attempt to remove Trump from office might just empower far-right conservatives. ‘It’s possible,’ she writes, ‘that impeachment held little terror for the CNP—its favored son, Mike Pence, was next in line.' " - San Francisco Chronicle

"For organizers wanting to understand the history of the rise of the right-wing in the US since World War II, one place to start would be the trifecta of Jane Mayer’s Dark Money, Nancy MacLean’s Democracy in Chains, and now Anne Nelson’s Shadow Network . . . Nelson tells a holistic story of the toxic cocktail of extremist political operatives and a right-wing evangelical base. This is the coalition that is winning our day. It is perhaps the greatest threat to our freedoms and a progressive future, and deserves our full attention." - The Forge

"[Nelson] follows the money … [Shadow Network] raises significant red flags that should alarm everyone who believes in democracy." - Kirkus Reviews

"A stunning and terrifying history of the Council for National Policy." - Literary Hub

"Nelson follows the money by focusing her lens on a shadow network: the Council for National Policy (CNP). In Nelson’s analysis, Trump would not have ascended to the Oval Office were it not for the support of the business leaders who comprise the CNP. . . . The ascendency of Trump also enabled CNP members like Steve Bannon, Kellyanne Conway, and Ralph Reed to become fixtures on cable news networks. The book also outlines the vast holdings of dynasties connected to the CNP such as the Koch, DeVos, Prince, and Mercer families." - American Atheist

"The exploitation of modern media by energy oligarchs and their allies has brought us to a critical moment for democracy and indeed human life. Around the world, the agents of climate change use technology to kill fact and monopolize values. Anne Nelson's work on middle America in Shadow Network reveals a political trend that threatens both our form of government and our species." - TIMOTHY SNYDER, Levin Professor of History at Yale University and author of ON TYRANNY and THE ROAD TO UNFREEDOM

“How fundamentalists made their peace with Mammon, the NRA, and environmental catastrophe’ could be the subtitle of this riveting story. Shadow Network abounds with startling revelations, not least about this alliance’s ties to the Koch brothers and its cynical takeover of media outlets in hard-pressed parts of the country that wield outsized power in the U.S. Senate and the Electoral College. Want to understand how so many Americans turned against truth? Read this book.” - Nancy Maclean, William H. Chafe Professor of History and Public Policy at Duke University and author of DEMOCRACY IN CHAINS

"Shadow Network is extensively researched, entertainingly argued, and deeply alarming. Anne Nelson shines a relentless spotlight on the Council for National Policy, the nexus of a movement that deploys political communications and advanced technology to mobilize reactionary religion in its quest for power." - Katherine Stewart, author of THE GOOD NEWS CLUB and THE POWER WORSHIPPERS

"Shadow Network belongs on the narrow shelf of indispensable books about the right-wing assault on democracy. In the course of unearthing the pitiless, cynical alliance of plutocrats and theocrats that has remade American politics, Anne Nelson breaks new ground about the Right’s under-the-radar media networks, their fat cats and business models, and their exploitation of the collapse of small-city newspapers. Anyone who wants to understand how oligarchs buddied up with cultural backlashers behind the scenes will learn much from these pages." - Todd Gitlin, author of THE SIXTIES and THE WHOLE WORLD IS WATCHING

"Both [The Power Worshippers and Shadow Network] have done impressive archival and on-the-ground research. These books are two of the fullest accounts of Christian nationalism to date. . . . Together, they paint a multidimensional portrait of the politicization of Christian faith that has neither a single source nor a majority of support among American Christians, despite its disproportionate impact." - Christian Century