The Midrange Theory: Basketball's Evolution In the Age of Analytics (Paperback) 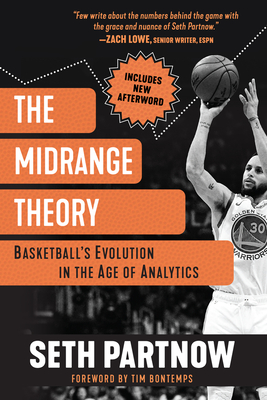 The Midrange Theory: Basketball's Evolution In the Age of Analytics (Paperback)

At its core, the goal of any basketball team is relatively simple: take and make good shots while preventing the opponent from doing the same. But what is a “good” shot? Are all good shots created equally? And how might one identify players who are more or less likely to make and prevent those shots in the first place?

The concept of basketball “analytics,” for lack of a better term, has been lauded, derided, and misunderstood. The incorporation of more data into NBA decision-making has been credited—or blamed—for everything from the death of the traditional center to the proliferation of three-point shooting to the alleged abandonment of the area of the court known as the midrange. What is beyond doubt is that understanding its methods has never been more important to watching and appreciating the NBA.

In The Midrange Theory, Seth Partnow, NBA analyst for The Athletic and former Director of Basketball Research for the Milwaukee Bucks, explains how numbers have affected the modern NBA game, and how those numbers seek not to “solve” the game of basketball but instead urge us toward thinking about it in new ways.

From shot selection to evaluating prospects to considering aesthetics and ethics while analyzing the box scores, Partnow deftly explores where the NBA is now, how it got here, and where it might be going next.

Seth Partnow covers the NBA and basketball analytics for The Athletic. He is the former Director of Basketball Research for the Milwaukee Bucks. Tim Bontemps is an NBA writer for ESPN.